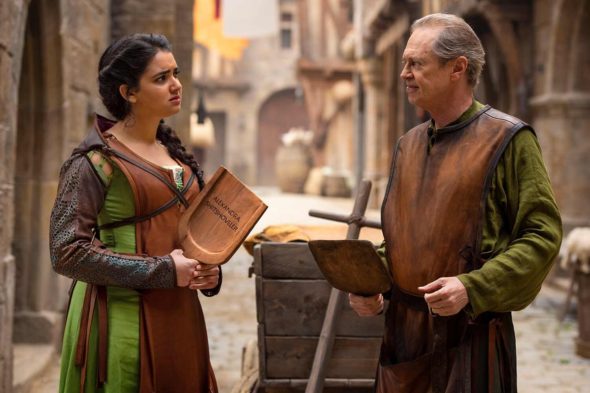 Can poverty, sickness, and ignorance be funny? Has the Miracle Workers TV show been cancelled or renewed for a third season on TBS? The television vulture is watching all the latest cancellation and renewal news, so this page is the place to track the status of Miracle Workers, season three. Bookmark it, or subscribe for the latest updates. Remember, the television vulture is watching your shows. Are you?

Airing on the TBS cable channel, the second season of the Miracle Workers comedy anthology series stars Daniel Radcliffe, Steve Buscemi, Geraldine Viswanathan, Karan Soni, Jon Bass, and Lolly Adefope. Subtitled Dark Ages, season two is a medieval story about friendship, family and trying not to be murdered. It centers on a group of medieval villagers who are trying to stay positive in an age of extreme income inequality, poor healthcare, and widespread ignorance.

The second season of Miracle Workers averaged a 0.29 rating in the 18-49 demographic and 901,000 viewers. Compared to season one, that’s down by 5% in the demo and down by 9% in viewership. Find out how Miracle Workers stacks up against other TBS TV shows.

Will TBS cancel or renew Miracle Workers for season three? The show’s been a good performer and, given the talent associated with it, I think TBS will order a third season. I’ll update this page with breaking developments. Subscribe for free alerts on Miracle Workers cancellation or renewal news.

10/23/20 update: Miracle Workers has been renewed for a third season on TBS.

What do you think? Are you glad that the Miracle Workers TV show has been renewed for a third season? How would you feel if TBS had cancelled this TV series, instead?

Really really funny. Each actor is GOLDEN with talent.
Figured it would get cancelled because it was too hip, so I’m
thrilled to see another season—-PLEASE KEEP THEM COMING.

I agree with Helen. Season 2 was awesome. Although I am not in the 18-49 demographic, more to the right, I loved the actors and actresses in their roles. I am hoping for a Season three. I am not into watching series tv. The last and only series I watched was Will & Grace. I would actually like to see the series continue with the season 2 format. Love the Old English background with Modern issues and humor.

Season 1 was OK but season 2 is fantastic! Absolutely hilarious. Bring us more!

I hope it continues with season 3. Its my “watch when my day feels the worst and I need good, funny thoughts before bed” show. The best show to DVR!

I LOVE this show .. season 3 please❤️

I LOVE this series. I suppose some people don’t get the wit and satire of this show. I find it refreshing from the Salacious reality shows. The formulaic sitcoms.
The cast is outstanding. Undoubtedly it will be cancelled like so many original shows that have gone before it. I would love to see what they come up with for season 3. Rule number 1 in television. Do NOT be original! 2. Rehash and produce the same show over and over again. She

Honestly cancel this show. I not sure if it was supposed to be an one and done show but season 2 is sceary bad. I don’t see how they can save this show.

I do agree with you, I just started season 2 in the on demand expecting it would just continued the work in Heaven story, nope season 2 the story as no connection with work at Heaven, the only way they can save it, if they do something like this, season 3 episode 1, would start like the dark ages, but it would zome out like it his God watching pass, so he can compare the present day improvment compare to what it was during the dark ages, so that way it would give a good reason to why season 2… Read more »