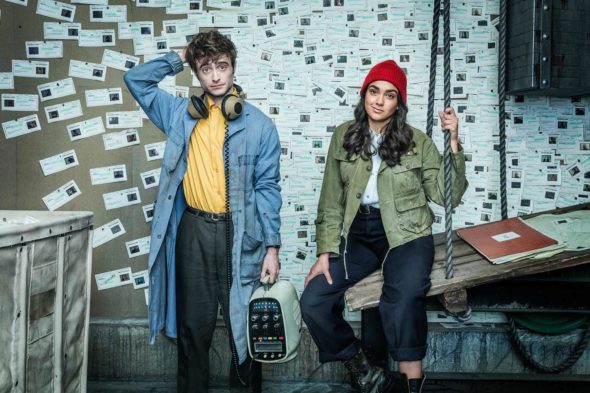 TV show description:
From creator Simon Rich, the Miracle Workers TV show is comedy anthology series set in Heaven and is based on Rich’s book, What in God’s Name. The series centers on a low-level angel named Craig (Radcliffe). Craig is in charge of managing all of humanity’s prayers.

Although Craig reports to God, God has kind of gotten over his creation. These days, he mostly prefers his hobbies and looks forward to new projects.

God’s right-hand man is Sanjay (Soni), but he can tend to be a bit of a yes-man. He will try though, to manage the big guy, when he’s acting less than cooperative. Sanjay’s not alone in this task. God’s assistant, Rosie (Adefope), is usually on hand.

In order to stave off Earth’s destruction, Craig works with another angel, Eliza (Viswanathan) on answering a prayer so difficult that it seems impossible — help two humans to fall in love. At first, Eliza is delighted to finally be assigned to answer prayers, but when she realizes how many go unanswered, she soon grows frustrated.

It is Laura (Compère) and Sam (Bass), whom Craig and Eliza must help. Although she is sweet and bright, Laura is nothing if not socially awkward. She is also quite lonely.

Sam is lonely too, as well as shy and lacking in confidence. He is immediately taken with Laura, but too nervous to do anything about his feelings, so he prays for God’s help in getting them together.

Will Craig and Eliza manage to bring Laura and Sam together and save mankind? Stay tuned.

What do you think? Do you like the Miracle Workers TV series? Should this TBS TV show be cancelled or renewed for another season?