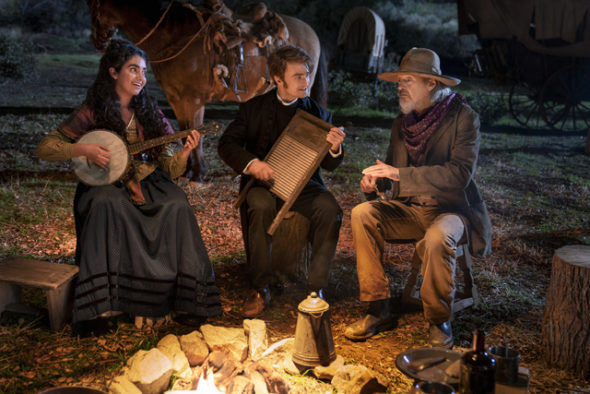 Where will these players end up next? TBS has renewed the Miracle Workers TV show for a fourth season. The third season finished airing in August and the next batch of episodes are expected to air at some point in 2022.

Airing on Tuesday nights, the third season of Miracle Workers averaged a 0.18 rating in the 18-49 demographic and 684,000 viewers in the live+same day ratings (includes all DVR playback through 3:00 AM). Compared to season two, that’s down by 37% in the demo and down by 24% in viewership. While these numbers don’t include further delayed or streaming viewing, they are a very good indicator of how a show is performing, especially when compared to others on the same channel.

According to TBS, Miracle Workers is cable’s top sitcom of 2021, reaching 18 million viewers to date, counting delayed and streaming views.

It was also announced today that Tacoma FD, which airs on sister channel truTV, has been renewed for a fourth season. Here’s a joint statement about the renewals from Adrienne O’Riain and Sam Linsky, Co-Heads of Scripted Programming, TBS, TNT, truTV. They said, “Miracle Workers and Tacoma FD never fail to deliver good times, good laughs, and passionate fans. We love the unique sensibility and distinctive, bold comedy of these shows. The fact that they continue to resonate so strongly with audiences speaks to the dedication of their creators and their brilliant network executives.”

Check out our status sheets to track new TV series pickups, renewals, and cancellations. You can find lists of cancelled shows here.
What do you think? Do you like the Miracle Workers series? Are you glad that this TBS comedy show has been renewed for a fourth season?

Skipped first season, but watched medieval, and wild west ones. It has too many episodes a season, and the quality declines from it.
Sometimes the episodes feel rushed because of how many commercials they have in it also.
Not sure what kind of limitations they have being on TBS content wise, but would like it to be dirtier.
It is the only thing I watch on TBS.
Would also like to see some Harry Potter cameos like the twins, or luna etc.

LOVE THIS SHOW. WISH IT WAS ON 5 NIGHTS A WEEK

These are two of the funniest shows on television period. Give them a try. Plus quality entertainment.

I’m delighted that it’s been renewed for 4th season.