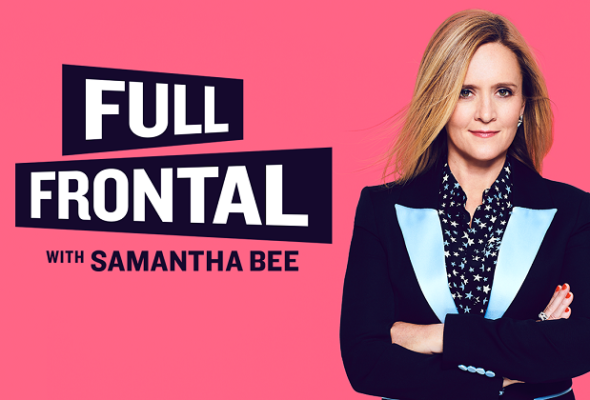 Here’s some additional information from TBS, via a press release:

“Full Frontal with Samantha Bee” brings a unique perspective to stories inside the Beltway and beyond, from sexual harassment in the media to the “boyfriend loophole,” and from global warming to child marriage in the United States. “Full Frontal with Samantha Bee” also travels the world to cover international stories, with segments from Rwanda, Jordan, Germany, Russia, Scotland, Mexico and Iraq. The series is executive produced by Samantha Bee, Jason Jones, Tony Hernandez of Jax Media, Miles Kahn, Alison Camillo, Kristen Bartlett and Mike Drucker.

“American Dad!” is Cable’s #3 comedy and centers on super patriotic CIA agent Stan Smith (voiced by Seth MacFarlane) and the misadventures of his unconventional family in Langley Falls, VA. Stan applies the same drastic measures used in his job at the CIA to his home life, where Stan’s blissfully unaware wife, Francine (Wendy Schaal), has an unfaltering loyalty that makes her blind to his unabashed arrogance. His left-wing activist daughter Hayley (Rachael MacFarlane), however, doesn’t let him off so easily – and knows just how to push her father’s buttons. Hayley’s brother is the geeky-yet-confident Steve (Scott Grimes), a kid who spends his time playing video games and obsessing about the opposite sex. The Smith cabinet is rounded out by two rather unconventional members: Roger (MacFarlane), a sassy, sarcastic and routinely inappropriate space alien, and Klaus (Dee Bradley Baker), an attention-starved goldfish with the brain of a German Olympic skier.

What do you think? Do you watch either of these comedy series on TBS? Will you be tuning in for 2022?