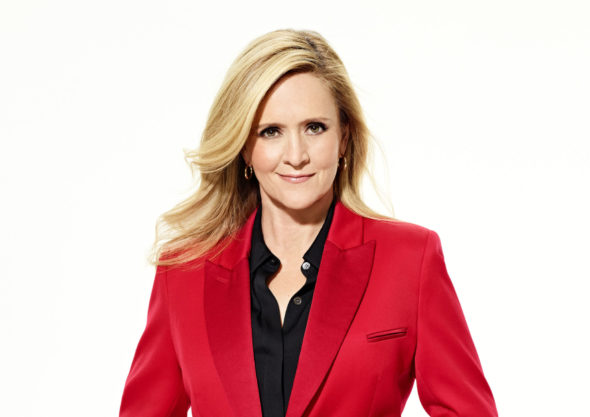 TBS has renewed the Full Frontal with Samantha Bee TV show for a seventh season but the series is on the move. The cable channel has announced the talk show and news satire series is moving to Thursday nights with its season debut in January 2022.

The Full Frontal with Samantha Bee show launched in February 2016 and has run 32-39 episodes a season. As of this week, 194 installments have aired.

Here’s the renewal announcement from TBS:

Additionally, TBS has renewed its first-look deal with Bee’s production company, Swimsuit Competition, for the development of its own brand of entertaining, binge-worthy original content. Swimsuit Competition continues to focus on discovering new talent and giving support and exposure to their ideas.

“Shining a spotlight on important issues and people, Sam provides needed commentary and asks questions of authority and ourselves that need to be asked,” said Brett Weitz, General Manager TNT, TBS and truTV. “But most of all, Sam is just funny and makes me laugh out loud each week. I’m thrilled she will continue to call TBS home.”

“I’m beyond excited to be returning to TBS for a seventh season,” said Samantha Bee, host of “Full Frontal with Samantha Bee”. “Now we have enough seasons for you to binge one every day of the week. I warned you I was tenacious.”

One of TIME’s 100 Most Influential People, Samantha Bee leads the charge by not only shining a light on issues of political and cultural significance through the show’s reporting, but also by implementing meaningful change through charitable initiatives during times of crisis. “Full Frontal” launched the #MailedIt campaign in support of the United States Postal Service and it also received attention for pioneering paid family leave by offering staffers the most extensive policy in the entertainment industry. The Emmy-winning show has continued to receive recognition, most recently winning the Writers Guild Award in February.

Check out our status sheets to track new TV series pickups, renewals, and cancellations. You can find lists of cancelled shows here.
What do you think? Do you watch this weekly news satire series on TBS? Will you be tuning in for the seventh season?

Unfunny garbage like this is why I haven’t watched TBS in years when before I used to keep the TV on that network all time, same thing with comedy central. I would remove both channels entirely from my provider if I could because they’re just taking up space and I don’t want to pay for them anymore.

Comedy Central really screwed the pooch when they handed off Jon Stewart’s show to Trevor Noah, when either Samantha Bee or John Oliver would have done much better jobs.

Now they’re doing their jobs for other networks… even though we only get to see them once a week.