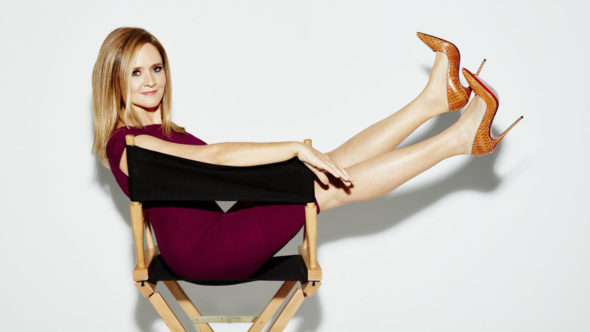 Full Frontal with Samantha Bee is returning! The weekly late-night series has been renewed for a sixth season by TBS. The series features Bee using “political satire to entertain, educate, and empower viewers.” Fans of the show won’t have to wait long for the series to return as new episodes will arrive in January.

TBS revealed more about the return of the Full Frontal series in a press release.

“After just barely avoiding the fall of democracy and despite a literal ongoing plague, TBS is thrilled to announce the renewal of its Emmy Award-winning show Full Frontal with Samantha Bee for a sixth season. A trailblazing force in late night, Full Frontal with Samantha Bee has continued to use political satire to entertain, educate, and empower viewers while keeping the government in check. This year, Bee also blazed an actual trail from her NYC studio to her backyard, where she taped new episodes during the pandemic with help from her husband and fellow Executive Producer, Jason Jones. As ad-supported cable’s #1 late-night show, Full Frontal with Samantha Bee continues to reach nearly 3.5 million viewers per episode and currently boasts more than 440 million YouTube views. Season six will premiere Wednesday, January 13 at 10:30 p.m. ET/PT on TBS.

“It’s a huge honor to get to keep doing this crazy smart and silly show for a sixth season,” said Samantha Bee. “Is it official though? Are we still waiting for Pennsylvania to certify the sixth season?”

“I’m so proud to have Sam part of the TBS family. After creating award-winning episodes from the dire elements of her backyard, I can’t wait to see what she does with some electricity and a roof over her head, said Brett Weitz, General Manager TNT TBS and truTV. “She is a champion for important causes and brings issues to light that inspire, entertain and educate.”

Additionally, TBS has renewed its first look deal with Bee’s production company, Swimsuit Competition, that focuses on developing amusing original content that is definitely worth spending a weekend bingeing. Swimsuit Competition continues to seek great ideas from people who are flying under the radar, or whose work has been underestimated.

One of TIME’s 100 Most Influential People, Samantha Bee continues to lead the charge by not only shining a light on issues of political and cultural significance through the show’s reporting, but by implementing meaningful change through the show which regularly creates significant charitable initiatives during times of crisis. “Full Frontal” launched the #MailedIt campaign in support of the United States Postal Service and pioneered paid family leave by offering her staffers the most extensive policy in the entertainment industry. The Emmy-winning show has continued to receive recognition, most recently winning the Writers Guild Award in February.

What do you think? Are you excited for another season of Full Frontal with Samantha Bee on TBS?

Her total viewership is 540,000
Most shows would have been canceled by now. Especially when the big bang theory and Family Guy reruns beat your show.

I can’t believe this “show” still on, what is wrong with TBS?

Watched twice and never again. What passes for comedy now days is sad.

Worst show EVER!!!!!! she wouldn’t know kindness n respect if it introduce itself to her.