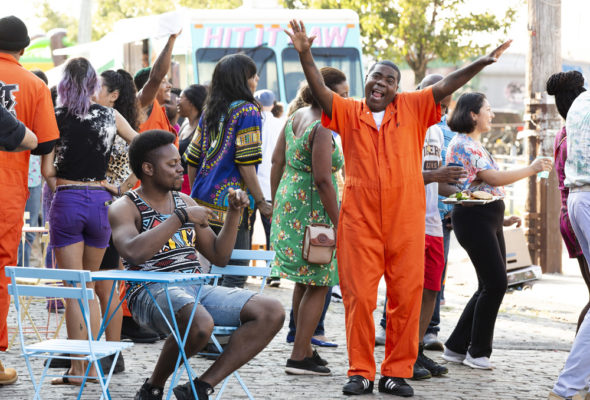 What’s next for Tray? TBS just announced they’ve ordered a fourth season of The Last OG TV show. Producer and comedian Owen Smith will serve as showrunner for the new season. It’s unclear if Tiffany Haddish is returning as her name is missing from the cable channel’s press release.

The third season of The Last OG, which finished airing in June, averaged a 0.24 rating in the 18-49 demographic and 734,000 viewers in the live+same day ratings. Compared to season two, that’s down by 26% in the demo and down by 16% in viewership. It remains one of the cable channel’s most-watched scripted series (though to be fair, there aren’t many left). According to TBS, the series does very well in streaming.

Here’s the press release from TBS about the renewal:

TBS Renews “THE LAST O.G.” For a Fourth Season

“The Last O.G.” follows Tray (Morgan), an ex-con who is shocked to see just how much the world has changed when he is released from a 15-year prison stint. After finding a place to live and new forms of income, Tray continues to meet challenges as he re-paves his way in his newly affluent Brooklyn neighborhood.

The network has tapped seasoned comedy writer, comedian and producer Owen Smith to serve as showrunner for the new season. Known for his unique storytelling and ability to hilariously embrace timely topics, Smith’s writing credits include “Black-ish,” “Survivor’s Remorse,” “The Arsenio Hall Show,” “Whitney” and “The Nightly Show with Larry Wilmore.” As a comedian, Smith has appeared on “The Late Show with Stephen Colbert,” “Conan,” “Laff Mobb’s Laff Tracks” and many more. His one-hour comedy special “Good Luck Everybody” made history as the first special shot entirely on an iPhone.

“‘The Last O.G.’ has become more powerfully poignant with each season while always remaining incredibly funny,” said Sam Linsky and Adrienne O’Riain, co-heads of scripted original programming for TBS, TNT and truTV. “Tracy Morgan embraces the world with his humor while Owen Smith tackles real-life conversations head-on through hilarity. We can’t wait to see where they take us in season four.”

“I am so excited that we get to make another season of ‘The Last O.G.,’” said Morgan. “All I ever want to do is try and bring joy to people which is hard right now but I appreciate that we will have the chance to go back to work and do what we can to make the world a little brighter.”

“I was already a big fan of the show so getting the opportunity to helm this production and work with this amazing cast and crew is a huge honor,” said Smith. “I’m looking forward to telling stories that humanize Black men in ways that are not just comedic but relevant and real.”

About TBS
TBS, a WarnerMedia brand, is a top-rated destination for television among young adults and known for escapist, lean-back entertainment, featuring smart, imaginative stories with heart and comedic edge. From scripted comedy series to late-night shows, game shows, and animated programming, TBS’ Originals slate is comprised of some of the most popular shows on cable — “Miracle Workers,” “CONAN,” “Full Frontal with Samantha Bee,” “The Last O.G.” and “American Dad!,” as well as the upcoming comedy “Chad.” The network’s slate of premium unscripted series includes the popular game show “The Misery Index,” upcoming reality-competition series “Go-Big Show” and “The Cube” and the revival of fan-favorite “Wipeout.” TBS’ lineup also includes comedy hits like “Family Guy” and “The Big Bang Theory,” classic sitcom favorites “Friends” and “Seinfeld,” blockbuster movies, and live event coverage of Major League Baseball, the NCAA Division I Men’s Basketball Championship and “ELEAGUE,” WarnerMedia’s eSports gaming competition. Viewers can watch shows on the TBS app, available for iOS, Android, Xbox One and other platforms and devices. Website: www.tbs.com

About WarnerMedia
WarnerMedia is a leading media and entertainment company that creates and distributes premium and popular content from a diverse array of talented storytellers and journalists to global audiences through its consumer brands including: HBO, HBO Max, Warner Bros., TNT, TBS, truTV, CNN, DC Entertainment, New Line, Cartoon Network, Adult Swim, Turner Classic Movies and others, as well as Xandr’s suite of advanced advertising solutions designed to help to improve advertising for brands, publishers, and consumers.

What do you think? Are you a fan of The Last OG? Will you watch season four on TBS?

Yes, I will watch. Its funny, My admiration of Tracy Morgan grows with each episode. What a great show

Can wait for the start date! Love the show