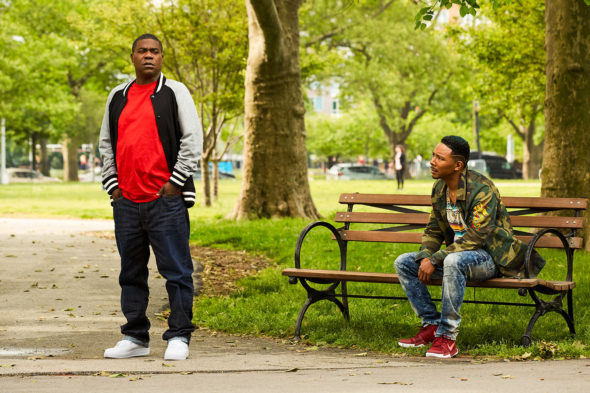 This ought to put a spring in your step. Tracy Morgan’s The Last OG TV show was originally supposed to premiere last fall, but TBS cancelled those plans in favor of a spring release date. Now they’ve announced the first season of The Last OG debuts on TBS, Tuesday, April 3, 2018 at 10:30pm ET/PT.

Check out the TBS press release.

The Last O.G. centers on Tray (Morgan), an ex-con shocked to see just how much the world has changed when he is released from prison for on good behavior after a 15-year stint. Returning to his newly gentrified Brooklyn neighborhood, he discovers that his former girlfriend, Shay (played by emerging, breakout star actress and comedian Tiffany Haddish), has married an affable, successful white man (Ryan Gaul) who is helping raise the twins (Taylor Mosby & Dante Hoagland) Tray never knew existed. Wanting nothing more than to connect with his kids, but having neither the money to support them nor himself, Tray falls back on the skills he learned in prison to make ends meet while treading on unfamiliar territory.

The Last O.G. also stars Cedric the Entertainer as the head of the halfway house where Tray is staying, and Allen Maldonado as Tray’s cousin Bobby, who helps him adjust to life on the outside. Executive-producing with Morgan and Peele are Eric Tannenbaum, Kim Tannenbaum, John Carcieri and Joel Zadak of Principato Young.

Among the guest stars lined up for The Last O.G. are Edi Patterson (Vice Principals), Chrissy Metz (This is Us), Malik Yoba (Designated Survivor), Joel Marsh Garland (Orange is the New Black), Heather Simms (As the World Turns), Wendy Makkena (NCIS) and Ray Anthony Thomas (The Hoop Life).

What do you think? How do you like the sound of The Last OG TV series? Do you plan to check out the premiere on TBS? Let us know, below.