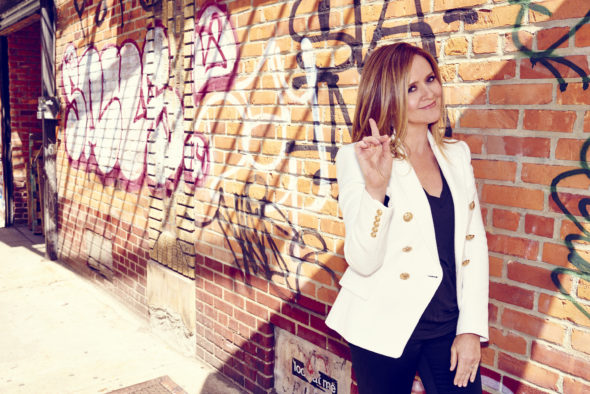 Don’t worry about the Full Frontal with Samantha Bee TV show being cancelled any time too soon. TBS has renewed the political satire TV series for season three and season four, and the third season debuts next month.

After its first season, TBS moved Full Frontal from Monday to Wednesday evenings, and that’s where it will stay for now. Full Frontal with Samantha Bee, season three, premieres TBS on Wednesday, February 7, 2018 at 10:30pm. Bee executive produces the series with her husband, Jason Jones, and with Tony Hernandez, Miles Kahn, Alison Camillo, and Pat King. Check out the TBS press release, to learn more.

Premiering in 2016 as the only female-hosted late-night program, Full Frontal has led the cultural conversation since its self-assured debut and heads into 2018 focused on the midterm elections. It averages four million total viewers per episode across TBS’ linear, VOD and digital platforms, and boasts more than 250 million YouTube views.

Currently, the show’s correspondents are traveling around the world on the Full Frontal Apology Race, a two-week romp around the globe to try and make amends for any deeply embarrassing thing our President has said. Fans can suggest people, places, and things to apologize to with #ApologyRace and @FullFrontalSamB on Twitter. On January 24 on TBS, the show will announce which of the Full Frontal correspondents succeeded in being the most repentant.

“We were fortunate to start our show in an election year, and I’m so grateful TBS has picked us up for two more seasons which will see us through the 2018 midterms and bring us into the 2020 election season,” said Samantha Bee. “It’s promising to be a real $h!tshow and I am counting on our viewers to coax me out of my panic bunker and get us through it.”

“No one does political comedy like Full Frontal; a two-season pickup is an obvious decision,” said Thom Hinkle, executive vice president of original programming. “Sam and her team have been relentlessly incisive in their satire, and the awards recognition and their growing viewership reflect that. Along with new episodes, expect more specials and a lot more blazers.”

Full Frontal with Samantha Bee shines a spotlight on stories inside the beltway and beyond, from sexual harassment in the media to the “boyfriend loophole,” and from global warming to child marriage in the United States. Full Frontal also travels around the world to cover international stories, with segments from Jordan, Germany, Russia, Scotland, Mexico and Iraq. The series is executive-produced by Samantha Bee, Jason Jones, Tony Hernandez, Miles Kahn, Alison Camillo, and Pat King.

What do you think? Are you a fan of the Full Frontal with Samantha Bee TV series? Will you tune in for the season three premiere? Did you expect it to be cancelled or renewed for a third and fourth season?

I never watch her show- I also change the channel when her promos come on. I think after the comments she made about Ivanka Trump in her last show it should be cancelled. At the very least, she should apologize on TV to Ivanka without being snarky. She’s not funny as it is.

I chance the channel when the “full frontal” commercials come on while watching the Big Bang Theory.

Not a fan, Wish it would get canceled! She’s not a good person and is too pushy with her liberal views!