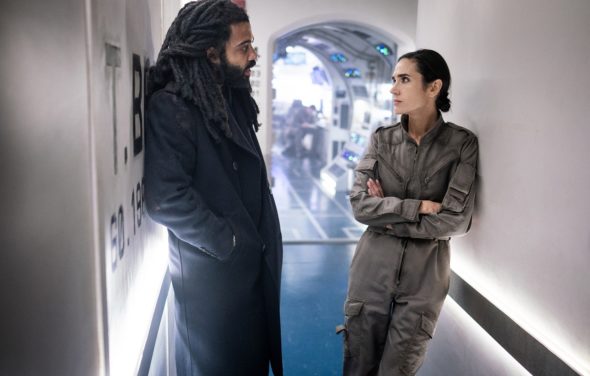 The train is returning to TNT. It’s been announced that the third season of the Snowpiercer TV series will launch on Monday, January 24th. The show has already been renewed for a fourth year.

TNT briefly teased what’s to come in season three in a press release:

The third season of “Snowpiercer” will premiere on TNT on Monday, January 24.

At the end of “Snowpiercer” season two, Layton (Daveed Diggs) and Ruth (Alison Wright), who were banished to Big Alice’s compost car, plotted to take back Snowpiercer. With the help of Javier (Roberto Urbina) and Alexandra (Rowan Blanchard), Layton and Ruth made it back to Snowpiercer and rallied with their supporters. Josie (Katie McGuiness) destroyed the Aquarium car, separating Snowpiercer’s head from the remaining 1,023 cars.

Season three picks up with Layton (Diggs) and his inner circle commanding a small 10 car “pirate train” in search of Melanie (Jennifer Connelly) and a possible warm location to restart civilization; while back on Snowpiercer, Mr. Wilford (Sean Bean) is consolidating power, awaiting Layton’s return.

Check out our status sheets to track new TV series pickups, renewals, and cancellations. You can find lists of cancelled shows here.
What do you think? Have you kept up with the Snowpiercer TV series on TNT? Will you be tuning in for the third season in January?

WOW so very AWESOME SNOWPIERCER will soon be back on TV YESSSSSSSS !!!!!! I have been waiting for news of the return and now I have an AWESOME show to look forward to watching !!! THANK YOU TNT for showing the series Snowpiercer three and many many more years to come !!!!!!!! The series is just as good as the movie called Snowpiercer !!!!!!!!!

Love this show and can’t wait for January and the new season!!!!