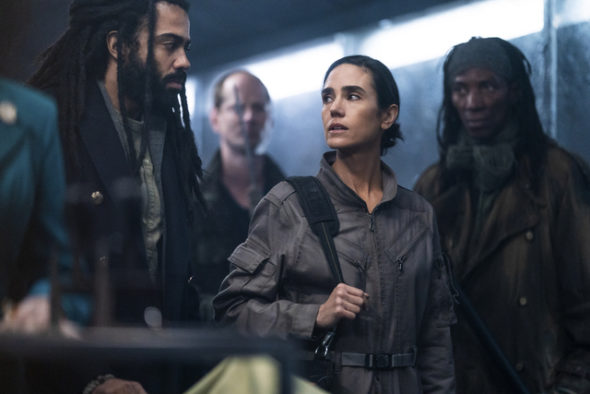 How will Mr. Wilford’s arrival change things? Has the Snowpiercer TV show been cancelled or renewed for a third season on TNT? The television vulture is watching all the latest cancellation and renewal news, so this page is the place to track the status of Snowpiercer, season three. Bookmark it, or subscribe for the latest updates. Remember, the television vulture is watching your shows. Are you?

Airing on the TNT cable channel, Snowpiercer stars Jennifer Connelly, Daveed Diggs, Sean Bean, Rowan Blanchard, Alison Wright, Mickey Sumner, Iddo Goldberg, Katie McGuinness, Lena Hall, Annalise Basso, Sam Otto, Roberto Urbina, Sheila Vand, and Steven Ogg. Set more than seven years after the world has become a frozen wasteland, the series centers on the remnants of humanity who inhabit a perpetually moving train, Snowpiercer, that circles the globe with 1,001 cars. Snowpiercer’s formidable and powerful Head of Hospitality is Melanie Cavill (Connelly) while Andre Layton (Diggs) is the world’s only surviving homicide detective and the one who leads those locked in the train’s “Tail”. There’s a revolution and Layton emerges as the survivors’ new leader. In season two, an entirely new power struggle emerges, causing a dangerous rift as people are divided between their loyalty to Layton and to Mr. Wilford (Bean), who has a new train, new technology, and a game plan that keeps everyone guessing.

The second season of Snowpiercer averaged a 0.25 rating in the 18-49 demographic and 919,000 viewers. Compared to season one, that’s down by 21% in the demo and down by 26% in viewership. Find out how Snowpiercer stacks up against other TNT TV shows.

We don’t have to wonder if TNT will cancel or renew Snowpiercer right now since the show’s already been renewed for a third season. I’ll update this page with breaking developments. Subscribe for free alerts on Snowpiercer cancellation or renewal news.

What do you think? Are you glad that the Snowpiercer TV show has been renewed for a third season? How would you feel if TNT had cancelled this TV series, instead?