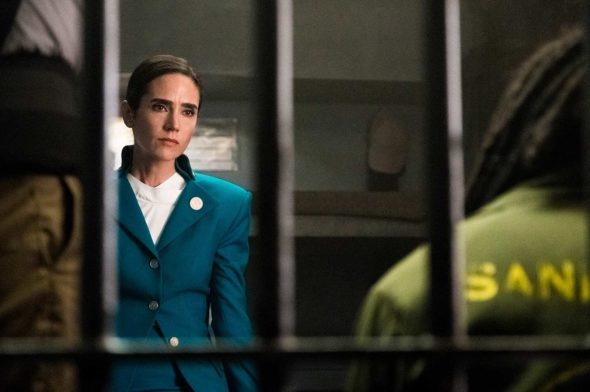 Can Andre uncover the truth? Has the Snowpiercer TV show been cancelled or renewed for a second season on TNT? The television vulture is watching all the latest cancellation and renewal news, so this page is the place to track the status of Snowpiercer, season two. Bookmark it, or subscribe for the latest updates. Remember, the television vulture is watching your shows. Are you?

Airing on the TNT cable channel, Snowpiercer stars Jennifer Connelly, Daveed Diggs, Alison Wright, Mickey Sumner, Susan Park, Iddo Goldberg, Katie McGuinness, Lena Hall, Annalise Basso, Sam Otto, Roberto Urbina, Sheila Vand, Jaylin Fletcher, Mike O’Malley, and Steven Ogg. Set more than seven years after the world has become a frozen wasteland, the series centers on the remnants of humanity who inhabit a perpetually moving train, Snowpiercer, that circles the globe with 1,001 cars. Snowpiercer’s formidable Head of Hospitality is Melanie Cavill (Connelly). She wields political power and has access to the very top. Meanwhile, Andre Layton (Diggs) has spent almost seven years locked in the train’s “Tail”. He’s a leader to his people and a revolutionary to the core. He also happens to be the world’s only surviving homicide detective, so he is brought uptrain to solve a murder that could upend life on Snowpiercer. Class warfare, social injustice, and the politics of survival play out in this adaptation of the graphic novel and the 2013 film from Bong Joon-ho.

The first season of Snowpiercer averaged a 0.32 rating in the 18-49 demographic and 1.25 million viewers. Find out how Snowpiercer stacks up against other TNT TV shows.

We don’t have to wonder if TNT will cancel Snowpiercer right now. The cable channel has already renewed the series for a second season so, for the time being, viewers can sit back and enjoy the ride. I’ll update this page with breaking developments. Subscribe for free alerts on Snowpiercer cancellation or renewal news.

What do you think? Are you glad that the Snowpiercer TV show has been renewed for a second season? How would you feel if TNT had cancelled this TV series, instead?

Love the show, and am glad it’s been renewed. Lots of interesting characters & back stories.

I think it’s different. I won’t lie am interested in seeing how they keep LJ folger out of jail. As she carrying the show right now

There is no freaking way they are going to let this renewal stand with how crappy the ratings are for this show already!

Christopher S.
Reply to  Naomi B

Rick
Reply to  Naomi B

They knew it wasn’t going to be that good it wasn’t intened to be great. It was an movie that they sold to an network after finding out it wasn’t an sequels. That film an season and episode 6 of season 2. but couldn’t air it because they couldn’t agree on it, so they sold it to another network right when production stop filming and they were like sure we’ll buy it just though it on as is when repeats starts as something new people will watch.

I enjoyed it but could have done without all the gore!