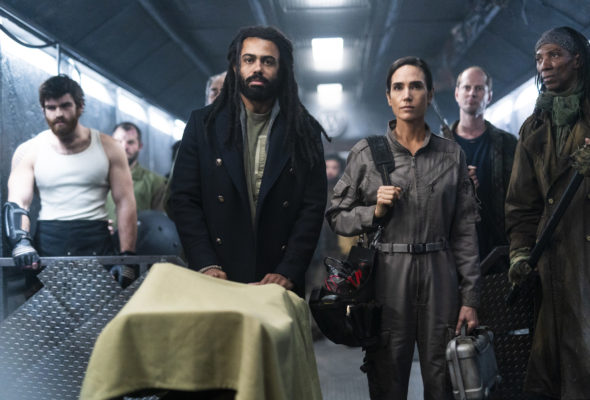 The news was announced at the show’s New York Comic Con Metaverse panel earlier today. Below, you can watch the Snowpiercer panel and a second season teaser, as well as read more about season two in the press release.

Season One Will Be Available on January 1 on HBO Max

LOS ANGELES – October 8, 2020 – TNT announced today during its New York Comic Con panel that season two of its top-rated, post-apocalyptic sci-fi thriller Snowpiercer will premiere on Monday, January 25 at 9 p.m. ET/PT. Sean Bean (Game of Thrones) and Rowan Blanchard (Girl Meets World) join the cast alongside Jennifer Connelly and Daveed Diggs. Viewers can catch up on season one on January 1 on HBO Max.

The first season of Snowpiercer debuted as the #1 new cable entertainment program in May with 3.3 million total viewers across TNT and TBS and remains cable’s #1 new drama series in 2020. The series premiere marked TNT’s largest premiere since The Alienist in 2018, and the show has reached 32 million viewers to date across TNT’s linear and digital platforms.

At the end of season one, the survivors of the revolution are trying to pick up the pieces and maintain a fragile peace amongst the now merged classes with Layton (Diggs) emerging as the train’s leader. Discovering Mr. Wilford (Bean) is alive and headed their way on a rival train, Melanie (Connelly) risks going outside to prevent him from invading Snowpiercer. While she’s out there, it’s revealed that Alexandra (Blanchard), Melanie’s daughter, who she thought had died, is alive and has become Wilford’s dedicated protegee. In season two, an entirely new power struggle emerges, causing a dangerous rift as people are divided between their loyalty to Layton and to Mr. Wilford, who has a new train, new technology and a game plan that keeps everyone guessing. While Layton battles Wilford for the soul of Snowpiercer, Melanie leads the charge on a shocking new discovery that could change the fate of humanity.

About TNT
TNT, a WarnerMedia brand, is watched by more people than any other cable network and known for big, lean-forward television that gives viewers the best seat in the house for electrifying stories, dynamic characters and thrilling events. TNT is home to some of television’s most popular original series including Snowpiercer, The Alienist, The Alienist: The Angel of Darkness, Animal Kingdom and Claws. TNT is expanding its programming to include premium unscripted with the docuseries ShaqLife, giving an all-access look at the larger-than-life personality. TNT also presents popular shows such as Bones and Castle, in addition to primetime specials and sports coverage, including the NBA and NCAA Division I Men’s Basketball Championships and the professional wrestling league All Elite Wrestling (AEW), which has exploded onto the scene with AEW Dynamite premiering as the night’s #1 wrestling show. Website: www.tntdrama.com

What do you think? Did you watch the first season of the Snowpiercer TV series on TNT? Do you plan to watch season two when it debuts?

Excited that Sean Bean is joining an already excellent show!

Oh Sean Bean !
Hope he will last more than 3 episodes 😀 😀

I thought SNOWPIERCER season one was great so I am looking forward to watching season two !!!!!!! I hope it is just as AWESOME as SNOWPIERCER SEASON ONE WAS AND THANKS TNT FOR BRINGING THE SHOW BACK FOR US TO WATCH !!!!!!!!!

I enjoyed season one of SNOWPIERCER and an looking forward to season 2. I’m also a big fan of Sean Bean.