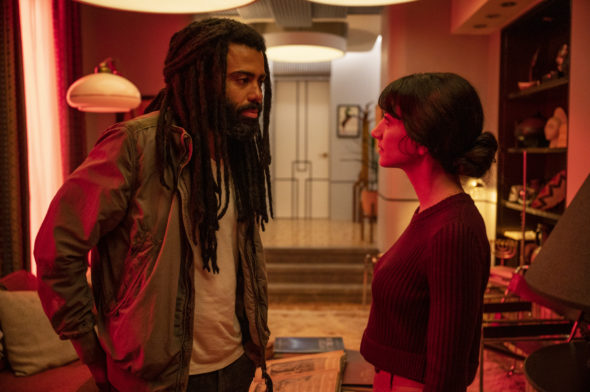 The third season of the Snowpiercer TV series finished airing tonight and production has just begun on the fourth season. Actors Clark Gregg and Michael Aronov have joined the TNT drama’s cast while Paul Zbyszewski will take over as showrunner. The show was renewed for a fourth season as production on the third season concluded back in July 2021.

A post-apocalyptic science-fiction thriller series, Snowpiercer stars Jennifer Connelly, Daveed Diggs, Sean Bean, Rowan Blanchard, Alison Wright, Mickey Sumner, Iddo Goldberg, Katie McGuinness, Lena Hall, Archie Panjabi, Annalise Basso, Sam Otto, Roberto Urbina, Sheila Vand, Mike O’Malley, Chelsea Harris, and Steven Ogg. Set more than seven years after the world has become a frozen wasteland, the series centers on the remnants of humanity who inhabit a perpetually moving train, Snowpiercer, that circles the globe with hundreds of cars. In the second season, Layton (Diggs) and Ruth (Wright) were banished to Big Alice’s compost car and they plotted to take back Snowpiercer. With the help of Javier (Urbina) and Alexandra (Blanchard), Layton and Ruth made it back to the train and rallied with their supporters. Josie (McGuiness) destroyed the Aquarium car, separating Snowpiercer’s head from the remaining 1,023 cars. Season three picked up with Layton and his inner circle commanding a small 10 car “pirate train” in search of Melanie (Connelly) and a possible warm location to restart civilization. Back on Snowpiercer, Mr. Wilford (Bean) is consolidating power while he awaits Layton’s return.

“We have been blessed with an abundance of riches in building the world of Snowpiercer – from the incredible cast and crew, to the loyal fanbase and the building blocks afforded from the film and graphic novel. Tonight’s finale is the culmination of several storylines, with unexpected twists and turns around every corner, and leading to an exciting fourth season with Paul’s vision and creative storytelling continuing the incredible show momentum,” said executive producers Graeme Manson and Aubrey Nealon.

In episode nine of season three, Layton (Daveed Diggs), Ben (Iddo Goldberg), Josie (Katie McGuinness), Alex (Rowan Blanchard) and Javi (Roberto Urbina) band together to rescue Melanie (Jennifer Connelly). Relieved to find her alive, she is brought back on board the train safely, resulting in a blowout party on the train. The celebration is short-lived however when Melanie exposes Layton for misleading the passengers by offering hope of finding a viable existence in New Eden. Alliances are tested in the action-packed third season finale that will air tonight at 9 pm ET/PT on TNT.

“I’m so grateful to everyone at TNT and Tomorrow Studios for letting me join the riveting world of Snowpiercer that Graeme and Aubrey have so beautifully crafted and built. We have an exciting fourth season planned, and I can’t wait to be on set with such an incredible cast and crew as we continue to explore new worlds, create new mysteries, and develop character relationships,” added Zbyszewski.

“The success of ‘Snowpiercer’ has always been due to the dedicated, innovative storytellers at the helm, and the incredible talent in front of and behind the camera,” said Sam Linsky and Adrienne O’Riain, co-heads of scripted original programming for TBS, TNT and truTV. “We’re so excited for what Paul has in store for next season and we are thrilled to welcome our new cast members.”

“Graeme and Aubrey masterfully brought the thrilling world and unique characters of ‘Snowpiercer’ to life, and we couldn’t be more grateful for their contributions,” said Founder/CEO Marty Adelstein and Partner/President Becky Clements of Tomorrow Studios. “We are excited for fans to see Paul thrillingly propel the complex journey of ‘Snowpiercer’ even further with Christoph continuing in his role as directing executive producer, especially as Clark and Michael join our incredibly talented cast.”

About TNT
TNT, a WarnerMedia brand, is watched by more people than any other cable network and known for big, lean-forward television that gives viewers the best seat in the house for electrifying stories, dynamic characters and thrilling events. TNT is home to some of television’s most popular original series including “Snowpiercer,” “Animal Kingdom,” and big-ticket movies. TNT’s programming also features premium unscripted including the docuseries “Rich & Shameless,” “Rhodes to the Top,” and “Shaq Life.” TNT also presents primetime specials and sports coverage, including Inside the NBA, the NHL, NBA and NCAA Division I Men’s Basketball Championships and the professional wrestling league All Elite Wrestling (AEW), which has exploded onto the scene with “AEW: Rampage” and the AEW specials “Battle of the Belts”. Website: www.tntdrama.com

What do you think? Have you been watching the third season of Snowpiercer on TNT? Are you looking forward to season four?

When is the FINAL SNOWPIERCER AIR FOR IT WAS NOT ON TN AT 9et the28th as listed in this email that was sent out on the 29th ? IF the SNOWPIERCER that aired on March 28th was the final why was it NOT shown or listed as it was season three FINAL ???????? I have watched every show on TNT as well as the movie that caused this series to be as good as the movie !!!!!!!!!