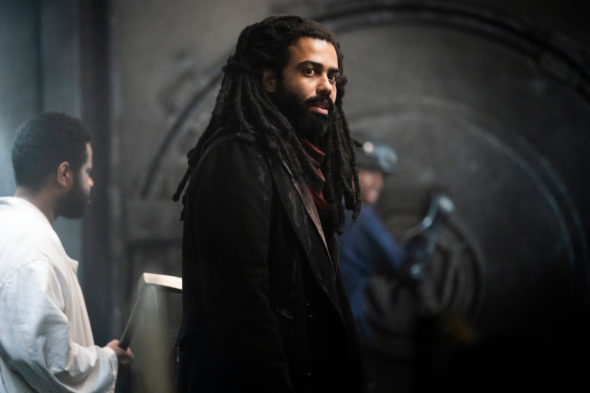 TNT is going to keep this train chugging along. The cast and crew of the Snowpiercer TV show have just wrapped production on season three of the popular cable drama and TNT has now announced that the series has been renewed for a fourth year. Season three is expected to debut in early 2022.

Here’s the renewal announcement from TNT:

LOS ANGELES – July 29, 2021 – TNT’s just celebrated the wrap of season three production on its hit drama series “Snowpiercer” with the announcement of a season four pickup. Produced by Tomorrow Studios, “Snowpiercer” seasons one and two are currently available to binge on the TNT app, with season three set to premiere on TNT early next year.

“Snowpiercer” premiered as the #1 new scripted drama on all of ad-supported cable in 2020. The second season reached 21 million viewers across linear and digital in L+7 viewing, ranking as a Top 5 cable drama.

“‘Snowpiercer’ has been an incredibly successful series for us that continues to capture the imagination of viewers, grow audience and maintain strong ratings,” said Sam Linsky and Adrienne O’Riain, co-heads of scripted original programming for TBS, TNT and truTV. “All of our seasons embark on an emotional, unexpected ride and the well-plotted storylines will continue to evolve and remain relevant to audiences. We’re excited to keep the train running into season four.”

At the end of “Snowpiercer” season two, Layton (Daveed Diggs) and Ruth (Alison Wright), who were banished to Big Alice’s compost car, plotted to take back Snowpiercer. With the help of Javier (Roberto Urbina) and Alexandra (Rowan Blanchard), Layton and Ruth made it back to Snowpiercer and rallied with their supporters. Josie (Katie McGuiness) destroyed the Aquarium car separating Snowpiercer’s head from the remaining 1,023 cars. With Layton in command of a 10-car “pirate train,” he and his team rushed to Breslauer Research Station to find Melanie (Jennifer Connelly).

Season three picks up with Layton (Diggs) and his inner circle commanding a small pirate train in search of Melanie (Connelly) and a possible warm location to restart civilization, aided by a newfound survivor. Back on Snowpiercer, Mr. Wilford (Sean Bean) is consolidating power, foiled only by secret allies of Layton’s hidden on the train, committed to the cause.

About TNT
TNT, a WarnerMedia brand, is watched by more people than any other cable network and known for big, lean-forward television that gives viewers the best seat in the house for electrifying stories, dynamic characters and thrilling events. TNT is home to some of television’s most popular original series including “Snowpiercer,” “Animal Kingdom,” and “Claws.” TNT is expanding its programming to include premium unscripted with the docuseries “Shaq Life.” TNT also presents primetime specials and sports coverage, including the NBA and NCAA Division I Men’s Basketball Championships and the professional wrestling league All Elite Wrestling (AEW), which has exploded onto the scene with “AEW: Dynamite”.

Check out our status sheets to track new TV series pickups, renewals, and cancellations. You can find lists of cancelled shows here.
What do you think? Have you checked out the Snowpiercer TV series? Are you happy to hear that this TNT drama has been renewed for both seasons three and four?

I’m just starting to watch it because all I’m hearing is how GREAT it is. Yeah for the next two seasons being picked up! Keep up the good work!