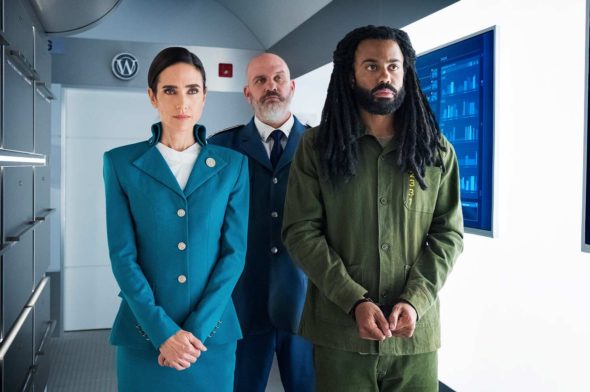 TV show description:
A post-apocalyptic science-fiction thriller series, Snowpiercer is based on the graphic novel series and the 2013 film from Bong Joon-ho.

Set more than seven years after the world has become a frozen wasteland, the series centers on the remnants of humanity who inhabit a perpetually moving train, Snowpiercer, that circles the globe with 1,001 cars.

Snowpiercer’s formidable Head of Hospitality is Melanie Cavill (Connelly). She wields political power and has access to the very top. However, Melanie is haunted by her secrets and morality has become a moving target for her.

Meanwhile, Andre Layton (Diggs) has spent almost seven years locked in the train’s “Tail”. He’s a leader to his people and a revolutionary to the core. He also happens to be the world’s only surviving homicide detective, so he is brought uptrain to solve a murder that could upend life on Snowpiercer.

Class warfare, social injustice, and the politics of survival play out in this adaptation.

What do you think? Do you like the Snowpiercer TV show? Do you think it should be ending or renewed for a fifth season?

PLEASE keep SNOWPIERCER in your lineup for it is an AWESOME show !!!!!!! I can not believe nor do I understand WHY every time a GREAT TV show is found the show is tossed in the trash can ??????? NO WONDER YOUR RAITINGS ARE DROPPING SO PLEASE KEEP SNOWPIERCER FOR MANY MORE YEARS TO COME !!!!!!! YOU NEVER KNOW WHEN YOU WILL GET ANOTHER TV SERIES AS GOOD AS SNOWPIERCER BUT I DOUBT YOU WILL KEEP THE TV SHOW BECAUSE IT IS TOO GOOD FOR YOUR STATION TO KEEP BUT I SURE HOPE YOU CHANGE YOUR ETHICS AND DO THE… Read more »

Please don’t cancel snowpiercer it us your best show

Snowpiercer is an AWESOME show but leave it up to the owners of TNT to get rid of another AWESOME show to put on like THE CW DID CALLED FLASH NOW HAT IS A SHOW HA NEEDED TTO END YEARS AGO!!!! PLEASE keep Snowpiercer alive for the show is so LOVED by many !!!!!!!!!!

This has got to be one of the stupidest Syfy shows ever made, besides the Syfy channel wouldn’t know good Syfy if it bit them in the you know what, and on the off chance they do get a good show, it gets cancelled. I ask, why does the Syfy channel exist if they don’t put on good Syfy?

Did you ever see the movie with Chris Evans?

Crummy show, to slow and boring, for me anyway