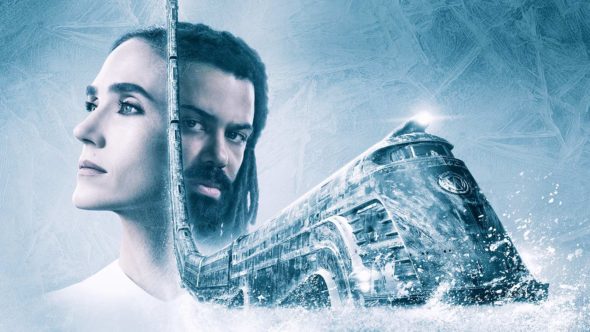 This train ride isn’t coming to an end soon. We don’t have to wonder if the Snowpiercer TV show will be cancelled since it’s already been renewed for a second season. The plan was to move the TNT series to TBS but then, the decision was made to keep it on TNT. Where will season two air? Stay tuned.

A post-apocalyptic science-fiction thriller series, Snowpiercer stars Jennifer Connelly, Daveed Diggs, Alison Wright, Mickey Sumner, Susan Park, Iddo Goldberg, Katie McGuinness, Lena Hall, Annalise Basso, Sam Otto, Roberto Urbina, Sheila Vand, Jaylin Fletcher, Mike O’Malley, and Steven Ogg. Set more than seven years after the world has become a frozen wasteland, the series centers on the remnants of humanity who inhabit a perpetually moving train, Snowpiercer, that circles the globe with 1,001 cars. Snowpiercer’s formidable Head of Hospitality is Melanie Cavill (Connelly). She wields political power and has access to the very top. Meanwhile, Andre Layton (Diggs) has spent almost seven years locked in the train’s “Tail”. He’s a leader to his people and a revolutionary to the core. He also happens to be the world’s only surviving homicide detective, so he is brought uptrain to solve a murder that could upend life on Snowpiercer. Class warfare, social injustice, and the politics of survival play out in this adaptation of the graphic novel and the 2013 film from Bong Joon-ho.

What do you think? Do you like the Snowpiercer TV series on TNT? Are you glad that it’s been renewed for a second season?

Loving this show! Glad that it is already renewed…