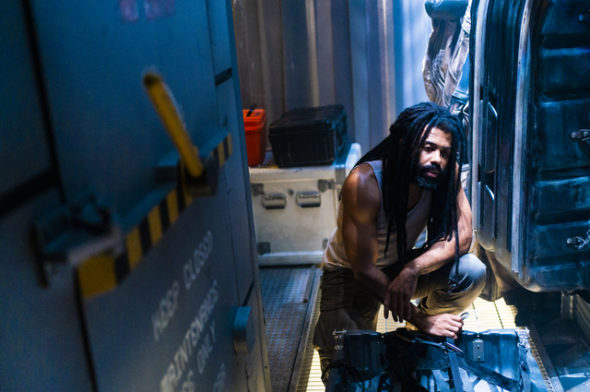 Is there a brighter future waiting? Has the Snowpiercer TV show been cancelled or renewed for a fourth season on TNT? The television vulture is watching all the latest cancellation and renewal news, so this page is the place to track the status of Snowpiercer, season four. Bookmark it, or subscribe for the latest updates. Remember, the television vulture is watching your shows. Are you?

Airing on the TNT cable channel, Snowpiercer stars Jennifer Connelly, Daveed Diggs, Sean Bean, Rowan Blanchard, Alison Wright, Mickey Sumner, Iddo Goldberg, Katie McGuinness, Lena Hall, Archie Panjabi, Annalise Basso, Sam Otto, Roberto Urbina, Sheila Vand, Mike O’Malley, Chelsea Harris, and Steven Ogg. Set more than seven years after the world has become a frozen wasteland, the series centers on the remnants of humanity who inhabit a perpetually moving train, Snowpiercer, that circles the globe with hundreds of cars. In the second season, Layton (Diggs) and Ruth (Wright) were banished to Big Alice’s compost car and they plotted to take back Snowpiercer. With the help of Javier (Urbina) and Alexandra (Blanchard), Layton and Ruth made it back to the train and rallied with their supporters. Josie (McGuiness) destroyed the Aquarium car, separating Snowpiercer’s head from the remaining 1,023 cars. Season three picks up with Layton and his inner circle commanding a small 10 car “pirate train” in search of Melanie (Connelly) and a possible warm location to restart civilization. Back on Snowpiercer, Mr. Wilford (Bean) is consolidating power while he awaits Layton’s return.

The third season of Snowpiercer averaged a 0.14 rating in the 18-49 demographic and 647,000 viewers in the live+same day ratings (includes all DVR playback through 3:00 AM). Compared to season two, that’s down by 42% in the demo and down by 28% in viewership. While these numbers don’t include further delayed or streaming viewing, they are a very good indicator of how a show is performing, especially when compared to others on the same channel. There can be other economic factors involved in a show’s fate, but the higher-rated series are usually renewed and the lower-rated ones are cancelled. Find out how Snowpiercer stacks up against other TNT TV shows.

We don’t have to wonder about the fate of Snowpiercer this time around since it’s already been renewed for a fourth season. I’ll update this page with breaking developments. Subscribe for free alerts on Snowpiercer cancellation or renewal news.

What do you think? Are you glad that the Snowpiercer TV show has been renewed for a fourth season? How would you feel if TNT had cancelled this TV series, instead? Should season four be the end?