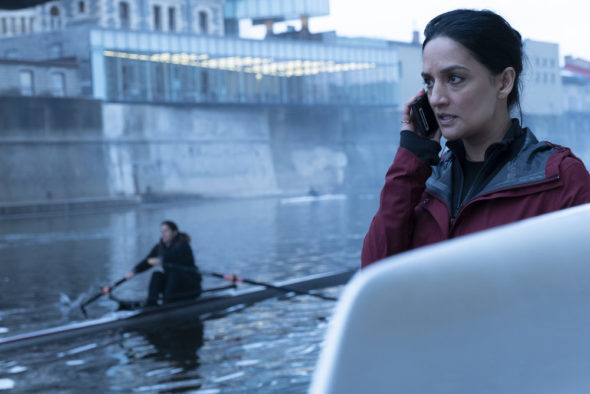 Snowpiercer has not finished airing its second season on TNT, but the producers are already looking ahead to season three. A third season renewal was announced for the sci-fi drama in January.

It has been reported that Archie Panjabi (above) is joining Jennifer Connelly, Daveed Diggs, Sean Bean, Rowan Blanchard, Alison Wright, Mickey Sumner, Iddo Goldberg, Katie McGuinness, Lena Hall, Annalise Basso, Sam Otto, Roberto Urbina, Sheila Vand, and Steven Ogg on the series, which follows the survivors of an apocalypse on a train that travels the planet.

No details were revealed about her character, other than she is named Asha, per Variety. Panhabi has previously starred on The Good Wife and Blindspot.

Snowpiercer currently airs on Monday nights on TNT. It is not known when season three will start production or when the new season will air.

What do you think? Are you a fan of Panjabi? Are you excited to see her on the Snowpiercer TV show on TNT?

AWESOME she is a a perfect leader in SNOWPIERCER and I for one am happy she will be a permanent leader on SNOWPIERCER YESSSSSSSSSSS – THANKS TNT FOR MAKING HER A PERMANENT ACTOR ON THE SHOW !!!!!!!!!!

We are huge fans of Panjabi since Good Wife.