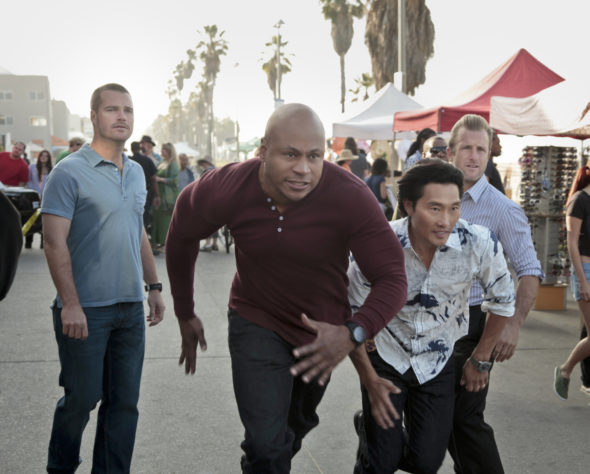 NCIS might be seeing another team join the fold. CBS is looking to add a fourth series to the franchise. The potential series would have a home base in Hawaii. This would put use the production base that CBS had in place while it was filming Hawaii Five-0 on the islands. Magnum PI still films in Hawaii, so a crossover with the new series would be possible.

Deals are still being worked on for this potential addition to the NCIS franchise. NCIS, a spin-off of JAG, began airing in 2003, and it is currently in its 18th season on CBS. NCIS: Los Angeles (season 12) and NCIS: New Orleans (season seven) also air on the network.

Deadline reports that viewers will not likely see a backdoor pilot episode for NCIS: Hawaii airing during one of the existing shows’ seasons. This would not be the first time the NCIS franchise has headed to Hawaii for an investigation though. Callen and Hannah (LL Cool J and Chris O’Donnell, above) visited Hawaii Five-0 for a crossover in 2012.

No other details for this potential series have been revealed.

What do you think? Do you want to see a new NCIS series on CBS? Would you tune in to watch NCIS: Hawaii if it makes it to air?

I’m not happy NCIS NOLA is ending but a Hawaii NCIS sounds awesome. I miss 5-O! Not happy McGyver was cancelled too. Hope Magnum isn’t cut anytime soon too.