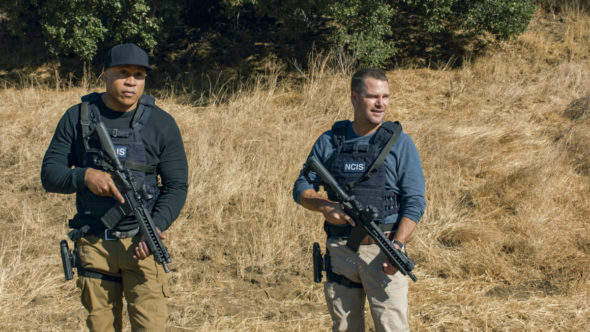 Agents Callen and Hanna will be back at work in the 2021-22 television season. CBS has renewed the NCIS: Los Angeles TV series for a 13th season.

The 12th season of NCIS: Los Angeles averages a 0.60 rating in the 18-49 demographic and 5.62 million viewers in the live+same day ratings. Compared to season 11, that’s down by 12% in the demo and down by 12% in viewership. There are 18 episodes in the current season and the finale’s expected to air on May 23rd.

In addition to the LA season 13 renewal, the network has also ordered NCIS: Hawaii to series, bringing the NCIS franchise tally back to three series for 2021-22. NCIS: New Orleans has been cancelled and its series finale also airs on May 23rd.

What do you think? Do you like the NCIS: Los Angeles TV series? Will you keep watching into the 13th season on CBS?

The show seems to be going nowhere. Either connect the dots with Callen and Ana, what’s going on with Henrietta and for goodness sake tie together Callens past. After 13 seasons it’s repetitious episodes and becoming boring.
Is Deeks and Kensey staying, leaving the agency or going to have a child. A lot of character questions that should have been addressed by now. This viewer is giving up

This series airs on fox channel in the U.K. but FOX closes on June 30th, so where can I view the new series 13?

I will absolutely watch season 13 of NCIS Los Angeles. I’d like to see more of the undercover ops like they did at the Russian Embassy, Tranquility Villa, and the Church of the Unlocked Mind. These episodes remind me of the older Mission Impossible shows. I think we will see Katia, David (who’s obsessed with Kensi), and Paul Angelo in season 13. I’d also like to see Sabatino again.

I think is a great show. Sorry to see characters leaving though.Hope they change minds.

Love this show so happy it is renewed and hoping for a Kensington/Deeks baby!

This will fail just like NCIS NO because of cast changes, I won’t watch it anymore

Best show on TV. So happy for another season. Its a cast of wonderful actors that really work well together.