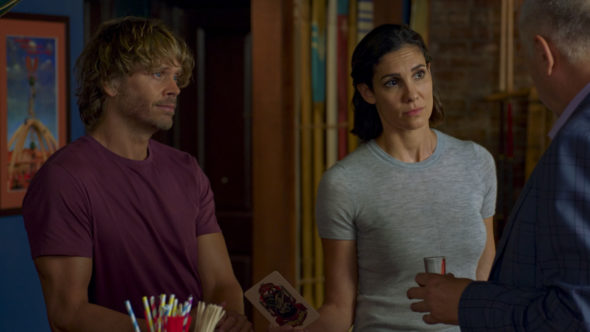 What new life-threatening situations are coming in the 12th season of the NCIS: Los Angeles TV show on CBS? As we all know, the Nielsen ratings typically play a big role in determining whether a TV show like NCIS: Los Angeles is cancelled or renewed for season 13. Unfortunately, most of us do not live in Nielsen households. Because many viewers feel frustration when their viewing habits and opinions aren’t considered, we invite you to rate all of the 12th season episodes of NCIS: Los Angeles here.  *Status Update Below.

What do you think? Which season 12 episodes of the NCIS: Los Angeles TV series do you rate as wonderful, terrible, or somewhere between? Do you think that NCIS: Los Angeles should be cancelled or renewed for a 13th season on CBS? Don’t forget to vote, and share your thoughts, below.

Boring. Tired of looking for Russians.

Love ncis la! Love it love it!! Keep it going!!

Keep NCIS LA it is a lot better than NCIS AND NCIS N.O So you guys should Renew it

A good ending to a terrible Season

This episode is was amazing ncis la best show ever

NCIS- LA definitely needs to be renewed! This is one of the very few shows I really look forward to.

Sorry, here I go again. I just watched show Frogman’s Daughter, did not enjoy the show. It took about five minutes before the subject of race came up. I am sick and tired of the subject of race being talked about. Another point, the L.A. County Sheriff’s department was mentioned regarding some employees being racists. Are you kidding me, putting the largest Sheriff’s Dept. on the chopping block is terrible. Again I will say the two new cast members add nothing to the show. They are given screen time and that takes away from the original members. If the original… Read more »

Give me a break. It is a lot better than NCIS and NCIS O.N get some glasses. Then maybe you just might change your mind. But I doubt it.

I just watched episode Love Kills. The supposed humor between the two new cast members was lousy. The two new team members add nothing to the show and detract from the original team members. Just my opinion.

I really love NCIS LA. I love the Kensi and Deeks partnership/relationship, the Callen and Sam partner/friendship, Hetty, Nell and even Eric. Yes there lives have changed, they are getting older as some say. But we are all getting older and COVID-19 has taken a toll on all of us. NCIS LA makes me laugh and does have and has great storylines. In this day and age that’s what we need. We need our shows and characters, please don’t cancel this show. I can’t wait for Kensi and Deeks to have a baby! I hope we get to see that.… Read more »

May be Densi twins – boy and girl

I hate to be redundant but the two new cast member need to go. They distract from the main group of actors. Eric new was of acting is getting a little old. Not funny or interesting. Hope there is more of Hetty, love her character.

This show no longer has any value. New additions are boring and add nothing to the show. Who cares if deeks and Ken’s I can’t get pregnant. What happened to the ncis part of the show. Cancel would be great. Should be keeping New Orleans.

Please ditch the newbies, they add nothing and dilute the original cast members storylines.
More romance between Anna and Callen, Deeks and Kensi, Nell and Eric. More of Sam on his boat, it is a navy show after all but naval vessels very rarely feature. Watching the new season twelve from England!!!

I have mentioned before how much I enjoy the show. The cast is great. I am disappointed with the two additions to the “team.” In my opinion they add nothing and actually take away from the main team. Heddy is outstanding, love her character. Hope the show continues and the two new cast members fade into the sunset.

Totally agree, Rountree and Fatima’s characters
Are very weak and in fact lower the standard of the
Show. Don’t really need them, though I think. Beale
Needs to return and Deeks needs more screen time

This show stinks. Characters are old and stale and predictable. All they do is run around with AR15’s and race cars from one building to another. NCIS N.O. AND NCIS are the exception. They’re decent shows, Deep 6 NCIS LA ASAP