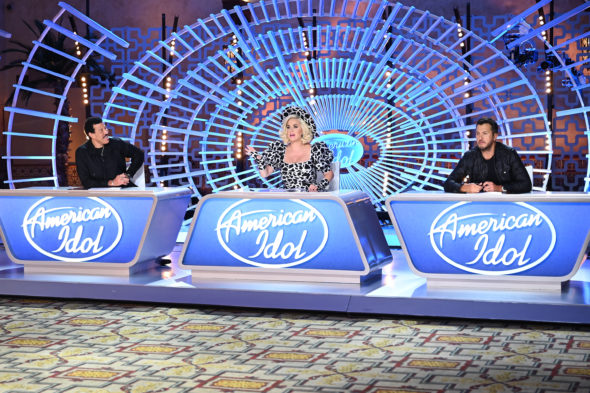 Is this long-running series getting a little winded in the 19th season of the American Idol TV show on ABC? As we all know, the Nielsen ratings typically play a big role in determining whether a TV show like American Idol is cancelled or renewed for season 20. Unfortunately, most of us do not live in Nielsen households. Because many viewers feel frustrated when their viewing habits and opinions aren’t considered, we invite you to rate all of the 19th season episodes of American Idol here.  *Status Update Below.

An ABC singing competition series, American Idol features Lionel Richie, Katy Perry, and Luke Bryan as judges in season 19 (the fourth season on ABC). Ryan Seacrest returns as host and Bobby Bones as the in-house mentor. After making it through the nationwide audition process, the contestant pool is narrowed through a series of elimination rounds. Once the contest reaches the semi-finals, although the judges offer their criticism, the decision to keep or cut a performer is up to the viewing audience. For a specified window of time, fans may vote for their favorites, via phone calls, text messages, and online. The winner claims the “American Idol” title and a recording contract.

What do you think? Which season 19 episodes of the American Idol TV series do you rate as wonderful, terrible, or somewhere between? Do you think that American Idol should be cancelled or renewed for a 20th season on ABC? Don’t forget to vote, and share your thoughts, below.

This show sucks. It’s nothing compared to the original. Not worth watching…. Crap TV.

I think its wrong to add an extra contestant to this yrs show. Do them, but there year as there year with just them. This is gonna make alot of people automatically not like this. Do those ten seperate .
I know its to late but as much as i like some of this top 10. Im not gonna be happy if one of them wins

American idol is the best music show out there. It’s fun and entertaining. It should never be canceled

Love the show. It is nice to see the judges getting along so well. It is lighthearted. We really enjoy it. Their positive feedback and empathy towards those auditioning is what we need in the world.

Would like American Idol better if the judges wouldn’t play around so much, but do not want it cancelled. Having said that Katy and Luke are the judges that horse around the most.