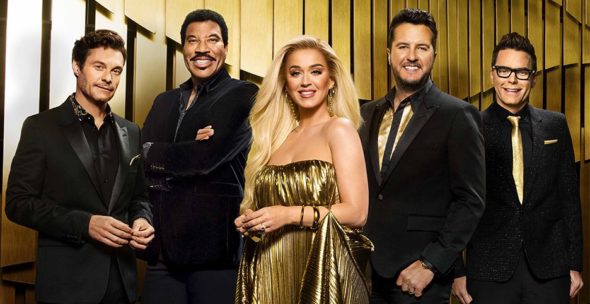 This show keeps singing ABC’s song. The alphabet network has renewed the American Idol TV series for its 20th season (the fifth year on ABC).

A singing competition, American Idol features returning judges Lionel Richie, Katy Perry, and Luke Bryan in season 19 (the fourth season on ABC). Ryan Seacrest returns as host and Bobby Bones is back as the in-house mentor. After making it through the nationwide audition process, the contestant pool is narrowed through a series of elimination rounds. Once the contest reaches the semi-finals, although the judges offer their criticism, the decision to keep or cut a performer is up to the viewing audience. For a specified window of time, fans may vote for their favorites, via phone calls, text messages, and online. The winner claims the “American Idol” title and a recording contract.

On Sundays, the 19th season of American Idol averages a 0.88 rating in the 18-49 demographic and 5.98 million viewers in the live+same day ratings. Compared to Sunday episodes of season 18, that’s down by 25% in the demo and down by 13% in viewership.

On Mondays, the 19th season of American Idol averages a 0.69 rating in the 18-49 demographic and 4.85 million viewers in the live+same day ratings. Compared to Monday episodes of season 18, that’s down by 46% in the demo and down by 27% in viewership.

The renewal announcement was made on social media and auditions are getting underway.
https://twitter.com/AmericanIdol/status/1392912772174860288

Check out our ABC status sheet to track the alphabet network’s new series pickups, renewals, and cancellations. You can find lists of cancelled shows here.
What do you think? Do you enjoy the American Idol TV series each year? Will you be watching season 20 on ABC?

American Ido! Thank you for another season!! Can’t wait!!!!

Never missed a single show since it started.

American Idol determines who will win not the viewers. I will not watch it in the future!!!!!

I watch sometimes, I will check out who is on , sometimes I vote, but not always a fateful watcher

I’m so happy it got renewed! This season has been all over the place so I’m glad that they have another season coming. I still hope willie or grace or even Casey is able to win this season. But, if I had to say something that I don’t like about the show it would be that the judges hardly ever give constructive criticism when needed. Anyway I can’t wait for next year and to see who’s gonna win this season!!!!

The ‘instant voting’ format and voting off at the end of the 2 hours is ridiculous! People are just voting blindly for favorites and not based on performances at all…

God Help Us. This show is way past it’s prime