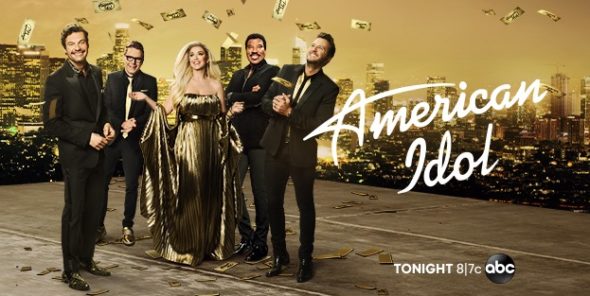 This year marks the 19th season of the American Idol series (15 years on FOX, four on ABC). The ratings have dropped a lot over the years but the show typically does well for the alphabet network. Will American Idol be renewed for a 20th season or, could it possibly be cancelled instead? Stay tuned.  *Status Update Below.

A singing competition series, American Idol features returning judges Lionel Richie, Katy Perry, and Luke Bryan, host Ryan Seacrest, and Bobby Bones as the in-house mentor. After making it through the nationwide audition process, the contestant pool is narrowed through a series of elimination rounds. Once the contest reaches the semi-finals, although the judges offer their criticism, the decision to keep or cut a performer is up to the viewing audience. For a specified window of time, fans may vote for their favorites, via phone calls, text messages, and online. The winner claims the “American Idol” title and a recording contract.

What do you think? Do you like the American Idol TV series on ABC? Should it be cancelled or renewed for a 20th season (year five on ABC)?

I’m thru with american idol. When they forced Caleb off the show it ended it for me. They knew he would win and didn’t want him to. If anyone has a problem with the video they say he left for then they need to grow up. I’m tired of hollywood playing the so called racist thing. He meant nothing by being in the video and if people can’t grow up and stop being so stupid then a true talent will never make it in the industry. American idol is rigged and it will be exposed in the future

I think at best he would’ve gotten second place. It’s not their fault the video was found. If they wouldn’t have taken action it would’ve looked bad for idol so I think they did what was best.

I absolutely love it…Please do not cancel…

This year of American Idol has surprised me. I don’t agree with some of the top picks. Are you not interested in ratings because you have lost my interest.

I actually really Have enjoyed this show! I hope it comes back for another season next year. I really feel like it a really inspiring show!! And there’s ALOT of great singers and when I saw a lot I really mean it! It’s hard to know who’s gonna take it all with a season like this! Any way I hope ABC renews this for another season because I’ve really enjoyed watching!