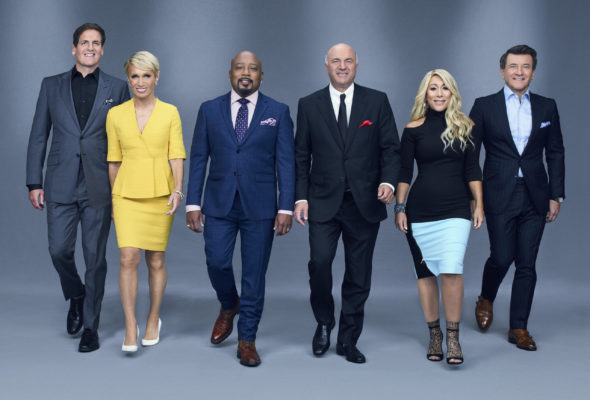 The sharks are heading back to the tank for a 13th year. ABC has renewed the Shark Tank TV series for the 2021-22 television season.

Airing on Friday nights, the 12th season of Shark Tank averages a 0.68 rating in the 18-49 demographic and 4.17 million viewers in the live+same day ratings. Compared to season 11, that’s down by 3% in the demo and up by 7% in viewership. There are two episodes remaining in the 25 episode season.

Check out our ABC status sheet to track the alphabet network’s new series pickups, renewals, and cancellations. You can find lists of cancelled shows here.
What do you think? Do you look forward to watching the Shark Tank TV series? Will you be tuning in for season 13 on ABC?

Yea One of my favorite shows!!!! Been watching re-runs “forever” When’s the first show? Especially Mark Cuban “Am Out” Love it. Besides, he has the greatest smile. Kevin, not so much

My favorite show LOVE it!!!!!FUNNY ,LOVE THE PRODUCTS -[most of them ] I have bought them!!!

Look forward to seeing each episode. Nice to see #13 coming up.

Haven’t watched for a year or so