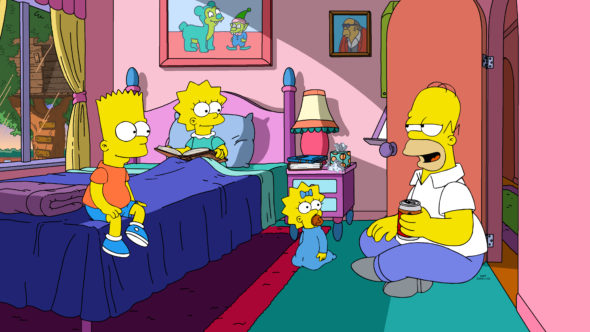 Could Homer finally go too far in the 32nd season of The Simpsons TV show on FOX? As we all know, the Nielsen ratings typically play a big role in determining whether a TV show like The Simpsons is cancelled or renewed for season 33. Unfortunately, most of us do not live in Nielsen households. Because many viewers feel frustration when their viewing habits and opinions aren’t considered, we invite you to rate all of the 32nd season episodes of The Simpsons here.  *Status Update Below.

What do you think? Which season 32 episodes of The Simpsons TV series do you rate as wonderful, terrible, or somewhere between? Do you think that The Simpsons should be cancelled or renewed for a 33rd season on FOX? Don’t forget to vote, and share your thoughts, below.

Goodbye season 1 -4 was best classic episode ever but nowadays awful the movie hilarious love it. Not same style anymore and not born yet when came out but watch it from beginning on dvd so funny.

This has been around since I was little. How can you cancel the simpsons. It’s our generation all around favorite family. Come on. The Simpsons are always welcome to return for our family we always watch.

Holy cow! Who is still watching this cartoon? We stopped watching it after season 2 or 3… when our kids grew up!

Cancelled horrible show sitcom 1-12 season were the best when came on air. Need to say goodbye contract up this season time leaving the air. 32 season good run. Long sitcom ever hate now not same lifestyle was back then. Hi

Well that was a passable season premiere. Better than Monetized Content by a little bit. 6/10.

Agreed with you but and including world wear out this show running ideas leave the family same age for 32 years let die and end it over.

Agreed with you need to end goodbye exhausting see on air.