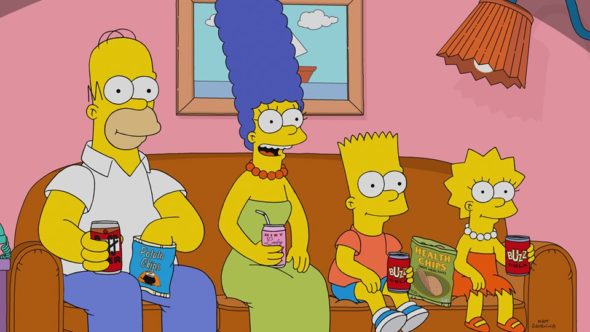 Will Bart ever get out of elementary school? Has The Simpsons TV show been cancelled or renewed for a 32nd season on FOX? The television vulture is watching all the latest cancellation and renewal news, so this page is the place to track the status of The Simpsons, season 32. Bookmark it, or subscribe for the latest updates. Remember, the television vulture is watching your shows. Are you?

The 31st season of The Simpsons averaged a 0.94 rating in the 18-49 demographic and 2.58 million viewers. Compared to season 30, that’s down by 22% in the demo and down by 17% in viewership. Find out how The Simpsons stacks up against other FOX TV shows.

The Simpsons has already been renewed for season 32 but it will be interesting to see what happens after that. Since Disney now owns the series, could the show move to a Disney-owned channel? I’ll update this page with breaking developments. Subscribe for free alerts on The Simpsons cancellation or renewal news.

What do you think? Are you glad that the The Simpsons TV show has been renewed for a 32nd season? How would you feel if FOX had cancelled this TV series, instead?

I am so excited and just all around glad they renewed The Simpsons for season 32 , I hope they renew it for many for years to come by far the best animated series of all time, they always make me laugh

Lady super older than me couple years now back then was hilarious not same lifestyle awful not funny let die leaving the air after this season. 32 season longest sitcom ever.

Cancelled after next season so stupid sitcom just hate show getting ridiculous.