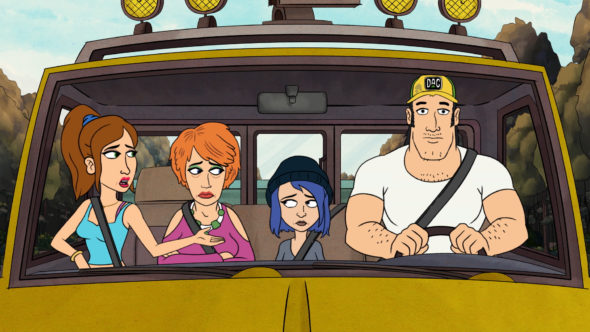 BLESS THE HARTS and © 2019 TCFFC ALL RIGHTS RESERVED. CR: FOX

Is love enough for the Harts? Has the Bless the Harts TV show been cancelled or renewed for a second season on FOX? The television vulture is watching all the latest cancellation and renewal news, so this page is the place to track the status of Bless the Harts, season two. Bookmark it, or subscribe for the latest updates. Remember, the television vulture is watching your shows. Are you?

Airing on the FOX television network, the Bless the Harts TV show stars the voices of Kristen Wiig, Maya Rudolph, Jillian Bell, Ike Barinholtz, and Kumail Nanjiani. Guests in the first season include Fortune Feimster, Holly Hunter, Mary Steenburgen, Drew Tarver, Gary Anthony Williams, Emily Spivey, Oscar Montoya, Jeremy Roel, Rich Blomquist, Andy Bobrow, John Solomon, Christy Stratton, Kevin Michael Richardson, and Jeremy Rowley. The series is based on the early life of series creator Emily Spivey. The Harts are a Southern family that is always broke and struggling to make ends meet. Though they haven’t achieved the American dream, the family feels rich in friends, family, and laughter. If only those could pay the bills. Jenny Hart (Wiig) is a single mother who supports her family working as a waitress in the small town of Greenpoint, North Carolina. She’s often butts heads with (or schemes with) her lottery scratcher-obsessed mother, Betty (Rudolph), and her witty, creative daughter, Violet (Bell). Thankfully, Jenny has her eternal optimist boyfriend, Wayne Edwards (Barinholtz), and Jesus (Nanjiani) in her corner.

The first season of Bless the Harts averaged a 0.85 rating in the 18-49 demographic and 2.24 million viewers. Find out how Bless the Harts stacks up against other FOX TV shows.

Will FOX cancel or renew Bless the Harts for season two? The ratings aren’t very good (when there isn’t a strong football lead-in) so, I’m leaning toward a cancellation. I’ll keep an eye on the ratings and update this page with breaking developments. Subscribe for free alerts on Bless the Harts cancellation or renewal news.

10/19/19 update: FOX has renewed the Bless the Harts TV show for a second season.

What do you think? Are you glad that the Bless the Harts TV show has been renewed for a second season? How would you feel if FOX had cancelled this TV series, instead?