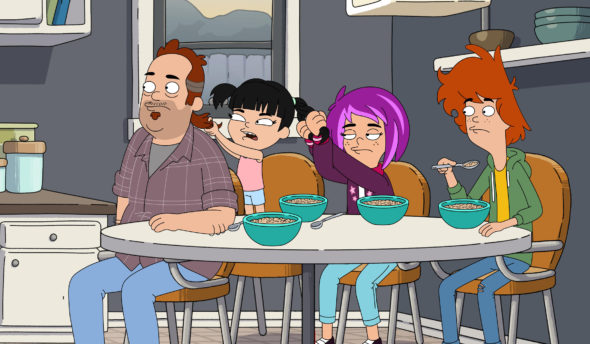 Will viewers get excited about watching an ordinary teen? Has the Duncanville TV show been cancelled or renewed for a second season on FOX? The television vulture is watching all the latest cancellation and renewal news, so this page is the place to track the status of Duncanville, season two. Bookmark it, or subscribe for the latest updates. Remember, the television vulture is watching your shows. Are you?

Airing on the FOX television network, Duncanville stars Amy Poehler, Ty Burrell, and Riki Lindhome, with Rashida Jones, Wiz Khalifa, Joy Osmanski. It’s an animated family comedy series that centers around an extraordinarily average 15-year-old boy. Like most teens his age, Duncan (Poehler) can see the wonders of adulthood on the horizon but his reality is much more mundane. He’s always broke, driving with his mom riding shotgun (Poehler), cringing at his dad’s efforts to be cool (Burrell), and babysitting his little sister (Osmanski).

The first season of Duncanville averaged a 0.41 rating in the 18-49 demographic and 1.14 million viewers. Find out how Duncanville stacks up against other FOX TV shows.

Will FOX cancel or renew Duncanville for season two? Based on the ratings and past experiences, I’m leaning toward a cancellation. However, given the current world situation, networks are going to be more likely to keep existing shows than usual. I’ll update this page with breaking developments. Subscribe for free alerts on Duncanville cancellation or renewal news.

What do you think? Are you glad that the Duncanville TV show was renewed for a second season? How would you feel if FOX had cancelled this TV series, instead?

Never heard of it… & I don’t watch cartoons at all.

You are not missing a thing. PC high school kids on edibles and multiple stale attempts at humor. Possibly the worst show I’ve ever seen and the Nelson ratings are awful. How this loser got picked back up I’ll never know. Covid I guess.