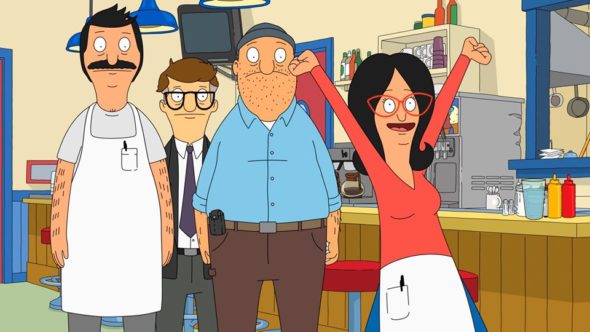 Is this show past its expiration date? Has the Bob’s Burgers TV show been cancelled or renewed for an 11th season on FOX? The television vulture is watching all the latest cancellation and renewal news, so this page is the place to track the status of Bob’s Burgers, season 11. Bookmark it, or subscribe for the latest updates. Remember, the television vulture is watching your shows. Are you?

Airing on the FOX television network, Bob’s Burgers stars voice actors H. Jon Benjamin, Dan Mintz, Eugene Mirman, John Roberts, Kristen Schaal, and Larry Murphy. Bob Belcher (Benjamin) is a family man and a third-generation restaurateur who lives on Ocean Avenue in a small seaside town. He operates Bob’s Burgers, a hamburger restaurant, with his fun-loving and happy-go-lucky wife, Linda (Roberts), and their three kids. Tina (Mintz) is their socially awkward and insecure eldest daughter. The middle child, Gene (Mirman) is whimsical, good-natured, and a bit goofy. Mischievous and a bit of a schemer, Louise (Schaal) is their youngest. While Bob has big ideas about burgers, his location is lacking and the rest of the clan falls a little short when it comes to service.

The 10th season of Bob’s Burgers averaged a 0.74 rating in the 18-49 demographic and 1.87 million viewers. Compared to season nine, that’s down by 29% and 24%, respectively. Find out how Bob’s Burgers stacks up against other FOX TV shows.

Will FOX cancel or renew Bob’s Burgers for season 11? I’m sure that the series will be renewed. However, now that Disney owns the show, one has to wonder if the series might move to ABC or another Disney-owned channel at some point. For now, I’ll keep an eye on the ratings and update this page with breaking developments. Subscribe for free alerts on Bob’s Burgers cancellation or renewal news.

*Update: FOX ordered episodes of Bob’s Burgers for a 10th production cycle 10AASA (BOB-10). This will give the series enough installments for season 11 for the 2020-21 broadcast season, and possibly beyond.

What do you think? Are you glad that the Bob’s Burgers TV show has been renewed for an 11th season? How would you feel if FOX had cancelled this TV series, instead?

I looovveeee bobs burgers!!! That’s my getaway when I get home from work!! Me and my kids eat dinner and get a great laugh in watching !!! Please continue -Sincerely a fan

My son and I are absolutely elated that there will be an 11th season however we do have some concerns about Disney taking it over as long as the Louise still has her smart mouth and Tina is still a zombie loving,buttcrazy ,teenager the show will be fantastic!!!

The ratings would probably be higher if views from countries outside the USA were counted as well.. Finding Bob’s by random on a random channel got me and my siblings back to watching tv, well, until the channel abruptly stopped airing this awesome show mid season 4 or something. (so now we’re waching what we can find online, like tiny clips youtube and such, (as we don’t have hulu, and it’s not on netflix, at least not in this region), until it’s back on air, if that’ll ever happen..) Sorry for any typos/weird wordings, this is clearly not my first… Read more »

Yes, please renew it! I love this show!! I wonder if it’s low only because we’re watching on Hulu instead of on cable.

Nooooo this show can’t be cancelled. Best show on tv

Ratings are probably only low because everyone is watching on hulu. I love this family bobs burgers 🙂

Love bobs burgers. Please renew. Works to get rid of the nighttime scary. Also i watchit on hulu.

Please DON’T cancel Bob’s Burgers , it makes me laugh and happy , I need this SHOW !!!!! Best Show EVER , I literally watch it every day, and it is the only show I watch, seriously

I am looking forward to season 11! Renew!

I love Bob’s Burger please don’t cancel it. I record episodes I miss and watch on DVR. I’m ready for season 11. Does anyone know if and when it might start if season 11 doesn’t get canceled?