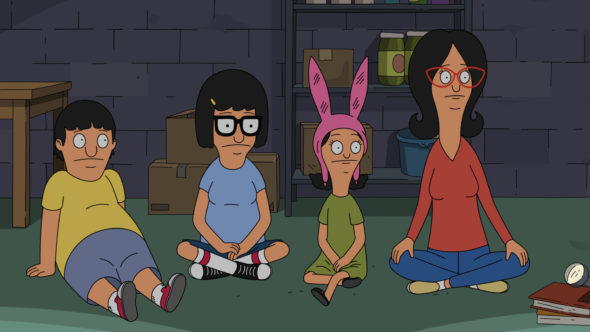 Do Bob Belcher and his clan keep their customers satisfied in the eighth season of the Bob’s Burgers TV show on FOX? As we all know, the Nielsen ratings typically play a big role in determining whether a TV show like Bob’s Burgers is cancelled or renewed for season nine. Unfortunately, most of us do not live in Nielsen households. Because many viewers feel frustration when their viewing habits and opinions aren’t considered, we’d like to offer you the chance to rate all the Bob’s Burgers season eight episodes here.

An animated FOX comedy, Bob’s Burgers centers on Bob Belcher (H. Jon Benjamin). This third generation restaurateur operates Bob’s Burgers with the help of his charming and musical wife, Linda (John Roberts). The couple’s three kids pitch in, too. The awkward Tina (Dan Mintz) is their eldest daughter. Middle child, Gene (Eugene Mirman) is whimsical, if a bit goofy. The clever and even cunning Louise (Kristen Schaal) is their youngest. While Bob has big ideas about burgers, his location is lacking. Meanwhile, the rest of the family falls short on service.

What do you think? Which season eight episodes of the Bob’s Burgers TV series do you rate as wonderful, terrible, or somewhere between? Should FOX cancel or renew Bob’s Burgers for a ninth season? Don’t forget to vote, and share your thoughts, below.

I don’t have cable, but my sister introduced me to Bob’s Burgers. My entire family loves it! We have bought all the DVDs and hope to have many more seasons available.

Absolutely love Bobs Burgers. Seen Every episode at least a dozen times and still can’t get enough. I do agree with the last comment that the episodes are too far spaced and believe the ratings would be even better if people knew that it would be on the same time every week. Unfortunately many of us have to watch it on alternative sources just because unless you keep up with tv guide or something simular, we fans have no idea when the next episode will be aired. Very huge fan of the show, as it is hilarious, while still being… Read more »

AGAIN not on this past Sun.!!! I wonder if they read these and get it through their think skulls that it must be on EVERY week, not a few at a time.