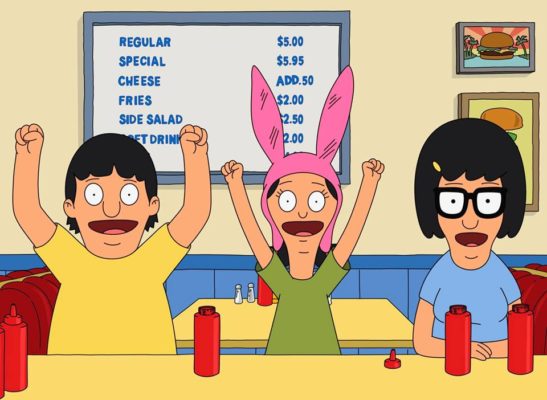 Would you say that the 10th season of FOX’s Bob’s Burgers TV show is “well done”? As we all know, the Nielsen ratings typically play a big role in determining whether a TV show like Bob’s Burgers is cancelled or renewed for season 11. Unfortunately, most of us do not live in Nielsen households. Because many viewers feel frustration when their viewing habits and opinions aren’t considered, we invite you to rate all of the 10th season episodes of Bob’s Burgers here. *Status update below.

A FOX animated family comedy series, Bob’s Burgers stars voice actors H. Jon Benjamin, Dan Mintz, Eugene Mirman, John Roberts, Kristen Schaal, and Larry Murphy. Bob Belcher (Benjamin) is a family man and a third-generation restaurateur who lives on Ocean Avenue in a small seaside town. He operates Bob’s Burgers, a hamburger restaurant, with his fun-loving and happy-go-lucky wife, Linda (Roberts), and their three kids. Tina (Mintz) is their socially awkward and insecure eldest daughter. The Middle child, Gene (Mirman) is whimsical, good-natured, and a bit goofy. Mischievous and a bit of a schemer, Louise (Schaal) is their youngest. While Bob has big ideas about burgers, his location is lacking and the rest of the clan falls a little short when it comes to service.

What do you think? Which season 10 episodes of the Bob’s Burgers TV series do you rate as wonderful, terrible, or somewhere between? Do you think that Bob’s Burgers on FOX should be cancelled or renewed for an 11th season? Don’t forget to vote, and share your thoughts, below.

*Update: FOX ordered episodes of Bob’s Burgers for a 10th production cycle AASA (BOB-10). This will give the series enough installments for season 11 for the 2020-21 broadcast season, and possibly beyond.

Bob’s Burger is a fantastic show that my family, my friends, and I look forward to watching every night. It makes us laugh, it makes us happy and we really enjoy each and every episode of every season. Please make Season 11 happen! Thank you!

Bob’s Burgers is a rare gem in a television landscape littered w/actual LITTER. Unfortunately, most tv shows these days pander to the lowest common denominator. Thank god for shows like Bob’s Burger, witty, well-informed, and thoughtful. Keep it coming for many more years, please.

Bobs Burgers should definately be renewed! This is the most amazing funniest show that has ever been made! Please don’t cancel Bobs! Life would suck without more New episodes of Bobs Burgers to enjoy!

Please don’t cancel bobs! I watch this show everyday, it’s the one good thing we Bob lovers have to look forward to in this world with everything in politics sucking! I know my Facebook Bobs Burgers fan club page will be crushed!!! Political distraction is to blame! How could the Simpsons and family guy still be on and bobs might not be? Bobs needs at least 10 more years!