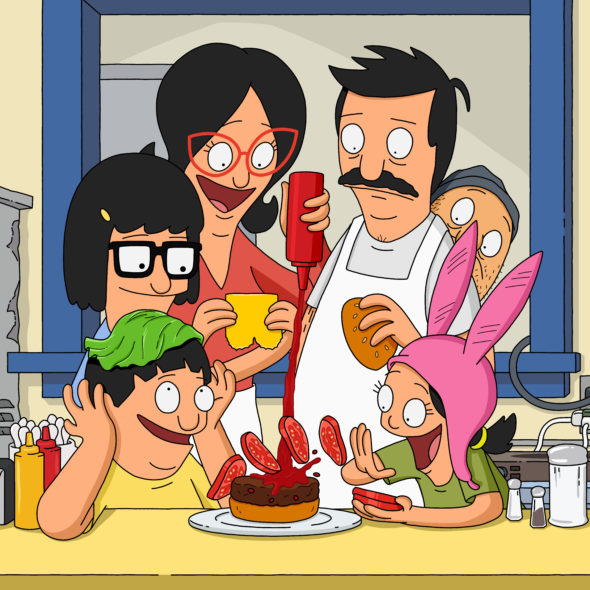 Does the ninth season of the Bob’s Burgers TV show on FOX satisfy your cravings? As we all know, the Nielsen ratings typically play a big role in determining whether a TV show like Bob’s Burgers is cancelled or renewed for season 10. Unfortunately, most of us do not live in Nielsen households. Because many viewers feel frustration when their viewing habits and opinions aren’t considered, we’d like to offer you the chance to rate all the Bob’s Burgers season nine episodes here. **Status update below.

An animated FOX comedy, Bob’s Burgers centers on Bob Belcher (H. Jon Benjamin). This third generation restaurateur operates Bob’s Burgers with the help of his charming and musical wife, Linda (John Roberts). The couple’s three kids pitch in, too. The awkward Tina (Dan Mintz) is their eldest daughter. Middle child, Gene (Eugene Mirman) is whimsical, if a bit goofy. The clever and even cunning Louise (Kristen Schaal) is their youngest. While Bob has big ideas about burgers, his location is lacking. Meanwhile, the rest of the family falls short on service.

What do you think? Which season nine episodes of the Bob’s Burgers TV series do you rate as wonderful, terrible, or somewhere between? Should FOX cancel or renew Bob’s Burgers for a tenth season? Don’t forget to vote, and share your thoughts, below.

Bob’s Burgers, in my opinion, is the most entertaining show on.

Please, please continue Bob’s Burgers! It’s the best show on tv! I know it took a while for it to grow in popularity, but everyone I know watches and loves it! In fact, I would bet that Fox would regret discontinuation, because another network would surely pick it up.

I love Bob’s Burgers. I have been watching it since season 1 and have been hooked. It’s the best animated show out there. Love it!!!

I just danced around my livingroom because Bob’s Burgers was renewed for a 10th season, this show is the greatest thing to ever happen in life, it’s on my tv everyday, every word to every song gets sung, it honestly just makes the worst day turn into the best day, no matter how many times I’ve seen an episode, it makes me laugh so hard, it needs to beat family guy and the Simpsons in longest running show, don’t give up on Bob’s! Let’s keep it running forever! Or at least 30 more years

Please don’t cancel this show me my kids love the show we been big fans sense day 1 please keep it on for 1 more season please..