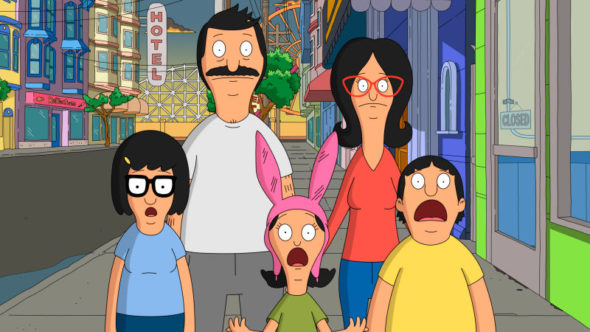 The Belchers are coming back. Deadline reports FOX has renewed Bob’s Burgers for a ninth season

Bob’s Burgers has been a hit for FOX since it debuted in 2011 and unlike most series, ratings have increased. So far, season eight is averaging 1.24 rating in the 18-49 demo and 2.731 million viewers.

For comparison, season seven averaged a .94 rating in the 18-49 demo and only 2.103 million viewers. That’s a near 20% boost in both ratings and viewing numbers. It looks like Bob’s Burgers is holding strong.

What do you think? Are you a fan of Bob’s Burgers? Are you glad it’s coming back?

I’ve honestly have never really had a favorite show, I’ve like many here and there but none stuck. After watching for the first time a long time ago, Bob’s Burgers has been a favorite it’s the only show I’ve ever kept up with. It’s relatable and quirky I will always love the show. Thank you so much for the creativity, hardwork, and time everyone has put into this show.

Thank you so much for renewing Bob’s burgers. It’s a hit, it’s great and funny as hell. It’s not too far out there. It’s just the right mix that keeps you wanting more. Thanks so much

I Love it! Its on Germany Tv too and i love this show watched every night, but they need a Streaming Gate normaly i only watching Streams.

So very glad renewed I am 62 years old and absolutely love this sho watch every night even if I have seen them a zillion times.

Can’t wait for it to return. It’s my favorite show on tv.

Love it!! Can’t get enough of Louise! They need to release more episodes per week, one is not enough.

love bobs burgers its my fave since king of the hill please keep them comin. i religously watch on dvr every night. keep it up

was totally sad when I thought it’s cancelled! thank goodness it is renewed. I super enjoy this show, keeps me up at night. Kudos to the animators and the writers!!

Love this show. Glad it’s renewed for Season 9, keep up the good work. I haven’t enjoyed animation like this since I was a kid.

Delis
Great show! I look forward to watch it as it airs and I also buy the seasons on Amazon. It gets even better for me when I rewatch it. As others have said, every family member is an unique weirdo, but they really like each other and support their weirdness. I thank the talent involved in production for the gift of laughter! ( Do I sound like Mr. Frond?)

Bob’s burgers is a great show. I think they started to go downhill once they made some of their episodes into musicals. How about no! Add the fact that fox went weeks in between shows rather than consistently every Sunday(giving something for fans to look forward to as well as create a predictable pattern). Without that fans of the show will just catch it when they remember to look for it. For me, it’s on Hulu.

I love that the concept jokes and characters remian fresh unlike the food at Jimmy Pestos even through 9 long seasons. this show is one of the few bright spots in the animated world these days where shows such as The Simpsons, Family Guy and American dad have seemed to get stale relying on the same jokes/concepts from season to season Boibs Burgers i feel is only really hitting their stride seasons 5,6,7, and 8 have been my favourites to date with episodes like work hard or die trying girl,dawn of the Peck,Late afternoon in the garden of bob and… Read more »

I’m a big bobs burgers fan but I hope they don’t over do there seasons like the Simpsons . Some shows are better with only 7-8 seasons !