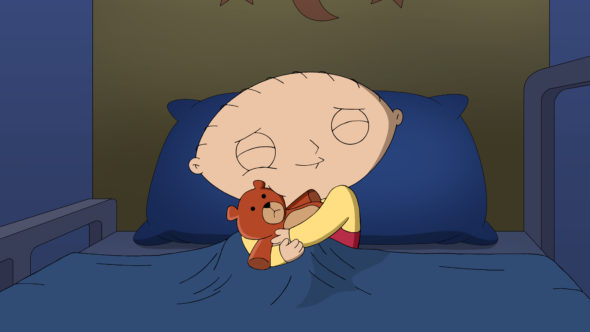 Family Guy: A Look at the Ratings

The 15th season of Family Guy is averaging a 1.24 rating in the 18-49 demographic and 2.752 million viewers. Compared to season 14, that’s down 4% in the demo and about even in viewership. Considering how much money it rakes in in syndication and the relatively low price of animated series, the renewal was pretty much a given. Compare Family Guy‘s ratings to those of the other FOX TV shows.

What do you think? Do you still enjoy the Family Guy TV series? Do you think you’ll tune in for season 16 on FOX? Let us know, below.

With family guy trying to cut out gay jokes now , I’ve got to wonder if they’re going to conform and become PC like everybody else. The reason I loved this show was because they made fun of everyone and everything. If they stop doing that because they’re afraid of offending a certain group I’ll probably find another show

These can’t be real responses. “Family Guy” only had a few sort of goodish seasons in it after it was renewed, but it definitely should have been cancelled around 2012, if there was some sort of artistic integrity involved. After meeting the producers, directors and writers involved with the longevity of it, I can see why the show sucks so much at this point.

I will definitely keep watching Family Guy, it is the greatest show, I love Stewie, I’m really glad it is renewed, I hope it will last for a long time to come!

Family guy is by far the best sitcom ever screw Seinfeld screw friends and thank you Simpson’s for paving the way for this style of cartoon. I constantly stream family guy it is the only show that entertains me besides educational documentaries. Seth McFarland is a genius I wish I could be on an episode that would be a dream come true.