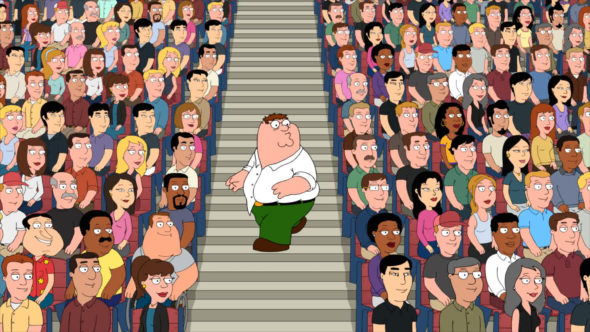 The Griffin family will be coming back for the 2019-20 television season. FOX has renewed Seth MacFarlane’s Family Guy TV show for season 17 (you’ll see it referred to as season 18 elsewhere). The series hails from 20th Century FOX, where MacFarlane has a deal, which is set to expire later this year.

Family Guy: A Look at the Ratings

The 16th season of Family Guy is averaging a 1.16 rating in the 18-49 demographic and 2.67 million viewers. Compared to season 15, that’s up by 2% in the demo and up by 7% in viewership. Find out how Family Guy stacks up against the other FOX TV shows.

The renewals also come as Fox looks to lock down top talent ahead of the 21st Century Fox-Disney merger. Upon completion of the merger, the Fox broadcast network will be part of the separate Fox Corporation entity that will emerge after the sale. The broadcaster previously ordered two more seasons of “The Simpsons,” making that show, “Family Guy,” and “Bob’s Burgers” the only shows at Fox currently renewed for next season.

What do you think? Are you a fan of the Family Guy TV series? Do you plan to watch the next season on FOX? Let us know, below.

I love Family Guy so much, not gonna lie American Dad got weak and it used to be AMAZING!!, Bob’s burgers is pretty cool but I haven’t really watched it paying attention. (American Dad was my favorite at first till I found Family Guy)

Peter Griffin is alive and well and reading regional news on 7 in country nsw australia. Goes by the name of Karl Lijnders. Talk about a doppleganger.

I absolutely LOVE Bob’s Burgers! It is one of my favorite shows! I do not watch it live and I do not DVR it. I watch it the following weekend when there is NOTHING on that I like. There is absolutely nothing on on the weekends that I like to watch, so I save all of my favorite shows for the weekend. (I am not home much during the week anyways) I have Sling TV, so I can easily tune into the most recent episodes. I really don’t think you guys should base the popularity of a show solely on… Read more »

I ABSOLUTELY LOVE Bob’s Burgers!!!! Can not wait for the new season!❤️❤️

This is the greatest cartoon ever made. I love Seth McFarlane, but he is going straight to hell. Lol

Great. Now when will the current season continue?