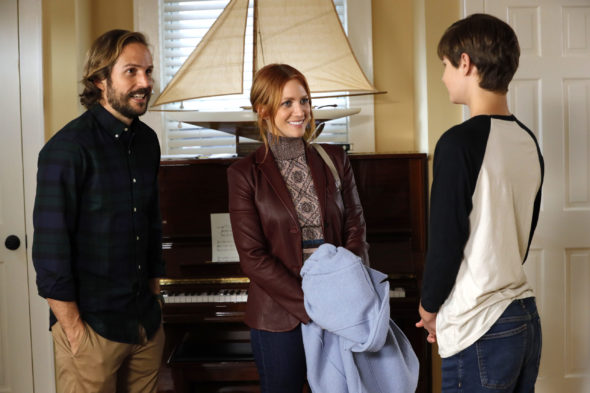 Almost Family did not take much time off for the holidays. The series is starting off 2020 with three brand new episodes, and the first will air tonight. Brittany Snow, Tim Hutton, Megalyn Echikunwoke, Emily Osment, Mo McRae, Mustafa Elzein, and Victoria Cartagena star in this series.

FOX shared complete details about the next three episodes of Almost Family. Check them out below.

Roxy is released from rehab and begins to make amends with those she hurt. In apologizing to Natalie, Roxy finds out that Izzy is now coached by Nick, which enables her to reveal the truth behind their relationship. Donovan decides it’s time for Julia to meet his kids, but Julia quickly realizes teenagers are trickier to win over than she thought. Edie and Amanda’s personal relationship blossoms, but Edie struggles to make a worthwhile deal for Leon’s sentence in the all-new “Rehabilitated AF” winter premiere episode of ALMOST FAMILY airing Wednesday, Jan. 1 (9:01-10:00 PM ET/PT) on FOX.

Roxy takes her first steps in speaking out against Nick, but quickly realizes the hardships that come with going public, especially when her rival attempts to discredit her story. Julia, frustrated with the lack of knowledge about her family history, meets up with her mom’s cousin who explains a whole other side to her mom she never knew. Worried she might get cold feet later down the line, Amanda challenges Edie to explore her sexuality. Meanwhile, Leon tries to convince Edie to work a pro-bono case for her half-brother in the all-new “Courageous AF” episode of ALMOST FAMILY airing Wednesday, Jan. 8 (9:00-10:00 PM ET/PT) on FOX.

Julia searches for more information about her mom, with added help from Nate (guest star Michael Urie). When Edie is granted approval to take on her half-brother’s pro bono case, she realizes Tim might have had something to do with Chad’s (guest star Daniel Cosgrove) change of heart. Meanwhile, Amanda confronts Roxy with suspicions of witness tampering regarding Dr. Bechley’s trial and the search for character witnesses continues in the all-new “Generational AF” episode of ALMOST FAMILY airing Wednesday, Jan. 15 (9:00-10:00 PM ET/PT) on FOX.

What do you think? Are you a fan of Almost Family?

KEEP THIS THIS SHOW PLS!!!! we’re all begging.

Please do not cancel I’m sick of tv stations putting good shows on then cancelling them might as well just sell tv!!

I just love almost family so sad to read it might be canceled???‍♀️I sure hope that it won’t be love the story line& the characters too.

I love this show please dont cancel it! So many story lines.so much more to know. I will be so sad if its canceled! Love all the actors it’s just great!!

Please don’t end this show it’s so good! Def deserves more time to get all the stories shown! Not everyone can watch the show when it’s being aired, so good please give another chance

Give us more episodes of Almost Family !! It’s a great show ! I watch it every week it’s on !! I need this show !!

Yes, I am a fan of Almost family. It’s a pretty new show, why end it now? I don’t watch it when it airs, I DVR it, so maybe it doesn’t have the correct statistics of viewers watching. However most people DVR everything these days. Please put the show back on.

There are so many story lines in this show to be explored. They just leave you hanging. This is why people don’t watch new shows. They get involved and then cancelled. What a bummer

There are some great storylines on this show. Quite a few plot surprises that need to be explored in more detail. I hope they don’t cancel the show and leave us hanging!