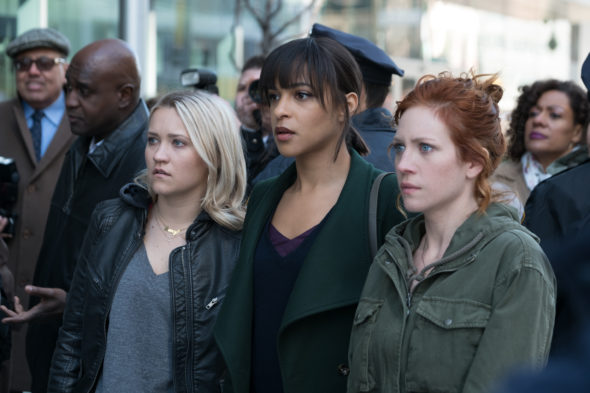 How big can this extended family grow in the first season of the Almost Family TV show on FOX? As we all know, the Nielsen ratings typically play a big role in determining whether a TV show like Almost Family is cancelled or renewed for season two. Unfortunately, most of us do not live in Nielsen households. Because many viewers feel frustration when their viewing habits and opinions aren’t considered, we invite you to rate all of the first season episodes of Almost Family here. *Status update below.

A FOX drama series, the Almost Family TV show stars Brittany Snow, Tim Hutton, Megalyn Echikunwoke, Emily Osment, Mo McRae, Mustafa Elzein, and Victoria Cartagena. Based on the Australian drama series Sisters, this show explores what it means to be a family and the potential emotional complications that new generations of In vitro fertilization (IVF) children can face. In the series, Julia Bechley (Snow) is an adult only child who has her world turned upside down. She learns that her father, Doctor Leon Benchley (Hutton), a pioneer in fertility, secretly used his own sperm to father over a hundred children. While still reeling from this revelation, Julia discovers that she has two new half-sisters — her former best friend, Edie Palmer (Echikunwoke), and ex-Olympic athlete Roxy Doyle (Osment). As the three daughters begin to reconcile their new reality, Julia starts life without having her dad by her side, Edie comes to grips with her sexuality, and Roxy faces adulthood out of the spotlight. The trio attempt to bond as unconventional sisters while dealing with new siblings as part of a rapidly expanding and very untraditional extended family.

What do you think? Which season one episodes of the Almost Family TV series do you rate as wonderful, terrible, or somewhere between? Do you think that Almost Family on FOX should be cancelled or renewed for a second season? Don’t forget to vote, and share your thoughts, below.

I need more seasons of this show why would they cancel it?! Evie just found out shes pregnant and didn’t even tell Tim before it ended! This makes me so mad

Almost family has only begun. Why is it being cancelled? Yes, I’m a little late to watching the show, but I really enjoyed it. This first season seemed like an intro, so how can it be discarded before it is finished. This is like started a great book. The first chapters reel you in and the rest of the pages are blank??? The viewers need something. The ending was just too rushed. What happens with Edie and Amanda(my favs)? Are Julia and her married doctor crush ultimately finding their way back to each other? Are more half siblings going to… Read more »

As someone who knows all to well of growing up adoring the man who taught everything as a child to be heartbroken and torn apart that another man was my father was an unexplainable moment in my life. Both fathers were so good to me only to find out at a much older age neither one were my dads. To feel the need to seek out who you are is mind blowing with closed doors at every corner. So to say the least I really relate to this show. My family and I Love this show. It is downtime for… Read more »

I am so disappointed..I really like this show. It was exactly the type of show I love to watch and there aren’t enough of them!

I have been watching this show since it initially started and I think that it can go far! A lot of people should be able to relate to Julia and her sisters in some way or another. I hope they don’t cancel it!

I just found this show and I had to binge watch all the episodes. Great cast and plot twists and I think it has a lot of potential.

I really LOVE this show!!! PLEASE don’t cancel it!!!

Good show . Should be continued .

I LOVE THIS SHOW AND HOPE THAT IT IS PICKED UP FOR SEASON 2!

This show should not be cancelled. It is terrific. I love it.

Please don’t cancel this show! I love it! I really hope there is another season.

Wow I cant believe they would consider canceling this amazing show. The story is great the writing is first rate and the cast is spectacular
Also it has a 93percent audience approval rate Hopefully if fox is dumb enough to cancel the show it will be picked up by another network or Netflix