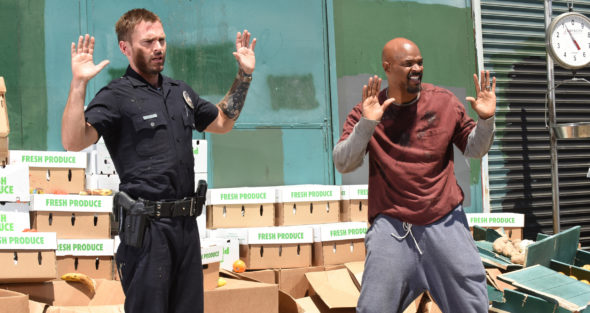 Now that Riggs is gone, will some of the audience of this FOX series depart with him? As we all know, the Nielsen ratings typically play a big role in determining whether a TV show like Lethal Weapon is cancelled or renewed for season four. Unfortunately, most of us do not live in Nielsen households. Because many viewers feel frustrated that their viewing habits and opinions aren’t considered, we’d like to offer you the chance to rate all the season three episodes of Lethal Weapon here. **Status update below.

An action-comedy-drama, Lethal Weapon stars Damon Wayans, Seann William Scott, Kevin Rahm, Johnathan Fernandez, Michelle Mitchenor, Keesha Sharp, Dante Brown, and Chandler Kinney. The series follows Detective Roger Murtaugh (Wayans), his LAPD colleagues, and his family at home. After a tragedy, Murtaugh is partnered with Detective Wesley Cole (Scott), a former CIA operative who’s been everywhere and seen everything. How long will it take him to adjust to Los Angeles?

What do you think? Which season three episodes of Lethal Weapon TV series do you rate as wonderful, terrible, or somewhere between? Should FOX have cancelled or renewed Lethal Weapon for a fourth season? Don’t forget to vote, and share your thoughts, below.

**Status Update 5/10/2019: Lethal Weapon has been cancelled; there will be no season four. Details here.

It is an entertaining bout great cast …Thank You

An excellent series, cast and argument.
The end of the 3rd season is open, so…
You must do the 4th Fox.

I personally think there should be a season four because in the end Murtaugh and Cole were finally opening up to each other and I also wanted to see if they caught the guy on their vacation..also so happy Cole and Natalie got back together please don’t cancel the show this is one of my favorite shows

It was a very good show, really miss Riggs, he made the show just enough goofness to be believable. I think it shoud be renewed for a new season. I still enjoy watching it!

Please keep the show running I watched it every Wednesday after I got home from school. This is my favorite show ever. This played a big ass part in my life because it made me want to be a cop

I did love this show! Bring back Clayn Crawford and I will watch it again. I did not watch season 3. Just not the same, he made the show.

Just heard it was canceled

Please keep Lethal Weapon for more seasons. We love the show even better with Cole. We look forward to it every week.

This show is so funny and one of my highlights of the week. The new guy fits right in and makes the show even better. Please keep this show on.

I’m continuing to watch the show based on probably loyalty and boredom. My critique is that the writing seems way to convenient. Characters get what they want too easily. while you get the action in it still, intricate conflict is lacking. Riggs drew us in because he was complicated and it made it interesting to watch. and when we do see him give in or get a win, it was a sigh of relief. Now the writing has lack of tension and anticipation. I may watch the show till the wheels fall off, but please, i beg you…MAKE IT MORE… Read more »

I love this show. It is fast moving and funny! Please do not cancel!