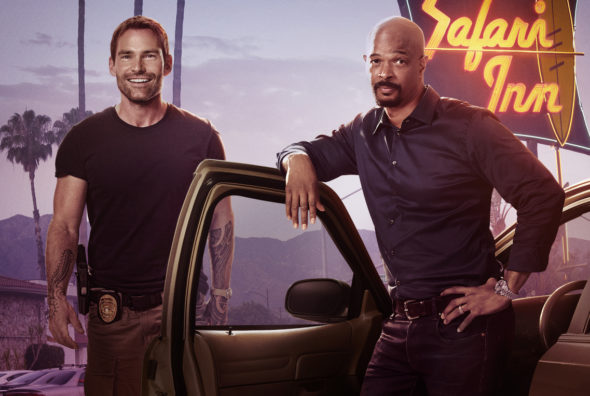 Can the magic be recaptured with a major cast change? Has the Lethal Weapon TV show been cancelled or renewed for a fourth season on FOX? The television vulture is watching for the latest cancellation and renewal news, so this page is the place to track the status of Lethal Weapon, season four. Bookmark it, or subscribe for the latest updates. Remember, the television vulture is watching your shows. Are you?

The third season of Lethal Weapon on FOX averaged a 0.70 rating in the 18-49 demographic and 3.06 million viewers. Compared to season two, that’s down by 29% and 26%, respectively. Find out how Lethal Weapon stacks up against the other FOX TV shows.

Coupled with the low ratings and Wayans’ possible departure, I think that season three will be the end. FOX seems to be open to more though, so we’ll see. I’ll update this page with breaking developments. Subscribe for free Lethal Weapon cancellation and renewal alerts.

Status Update 5/10/2019: Lethal Weapon has been cancelled; there will be no season four. Details here.

What do you think? Did you hope the Lethal Weapon TV show would be renewed for a fourth season? How do you feel, now that FOX has cancelled this TV series, instead?

The way you left season 3 has to be the worst ending to a show I have ever seen.I did not like that you got rid of Riggs but cole did just fine but the ending to season 3 was HORRIBLE!!
Do another season

Please I don’t know if this is possible but I can still ask…. Is it possible to bring detective Riggs back? Please he is the reason I kept on watching the show….even when he died I still kept my fingers crossed that he would come back. Cole is great but I miss Riggs so much. Please bring him back. Also please let the show continue… I just love it( the drama, comedy, action, romance). Like the show is a 10/10. Please please please please please and please. Am begging.

I loved this show and the actors. I was sad to hear it cancelled I have NEVER missed an episode. I hope you will bring it back.