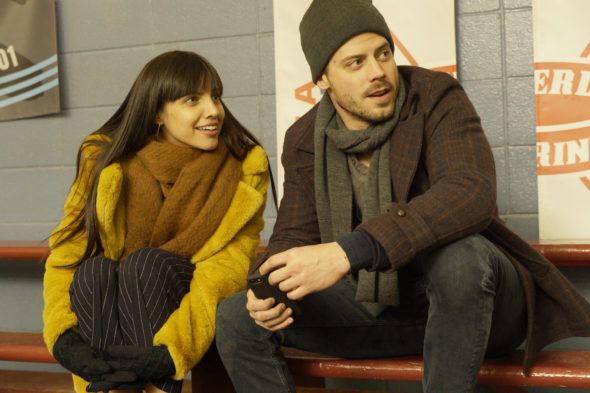 Will there be a merry Christmas in the first season of The Moodys TV show on FOX? As we all know, the Nielsen ratings typically play a big role in determining whether a TV show like The Moodys is cancelled or renewed for season two. Unfortunately, most of us do not live in Nielsen households. Because many viewers feel frustration when their viewing habits and opinions aren’t considered, we invite you to rate all of the first season episodes of The Moodys here. *Status Update Below.

A FOX single-camera comedy series, The Moodys stars Denis Leary, Elizabeth Perkins, Jay Baruchel, Chelsea Frei, and Francois Arnaud. Based on an Australian TV show, this series revolves around the Moody family of five. They are a tight-knit, though slightly dysfunctional, group that gathers in their hometown of Chicago for the “perfect” holiday. Each Moody has his/her own eccentricities and is also hiding secrets from the other members of the family. Sean Moody Sr. (Leary) and his wife, Ann (Perkins), are parents of three grown children. Freshly single, Dan (Arnaud) is the youngest of the siblings and the “creative one”. Sister Bridget (Frei) is married and the “overachiever” of the clan. Meanwhile, Sean Jr. (Baruchel), is the eldest sibling and the “screw-up” who still lives at home with his parents.

What do you think? Which season one episodes of The Moodys TV series do you rate as wonderful, terrible, or somewhere between? Do you think that The Moodys on FOX should be cancelled or renewed for a second season? Don’t forget to vote, and share your thoughts, below.

Love the Moody’s!!!! Very funny please bring it back!!!

The absolute worst. They took a great show (A Moody Christmas) and dumbed it down, stripped it of all its charm, and called it a day. I hated every minute.

Love the show! Well written ,relatable characters.Always loved Dennis Leary. Along with him, the whole cast is great! Please keep this series on !

I surely hope this is going to become a full series. I enjoy seeing Denis Leary back on the small screen.

Leary and perkins are the only interesting characters in the show,at this point. The writing for these actors is weak, I am a fan of both and the storyline and writing should be of higher intensity for their skills.

loved this show hope they do more …i want to see what happens next in this family..everyone was great in their parts..loved to see Francois Arnaud in a comedy…please bring them back for more..lots of story to be told…really funny and true to life..made me laugh out loud…

I LOVED this show! Best comedy on network tv, by far. This show actually made me laugh more than any of the usual ‘saccharine’ same old same old family type comedy. Smart, edgy, and hilarious. More ‘Real’ than most. I could relate to this one. I HOPE they bring this back as a weekly series, not just Christmas show

I absolutely love this show! Great chemistry between characters and great story lines. Please keep this show going!! Good shows are hard to come by.

I absolutely loved this show! The characters and approach are great in that they reflect reality far better than a super sweet cosy series you often see this time of year . We may want the perfect family and Christmas but honestly, that is impossible these days You can relate and follow the dysfunction and hope of each character. The actors have done an amazing job and I would love to see more of The Moody’s. François Arnaud was perfect as the disastrous Dan Moody and added a romantic element to the show wonderfully. Jay Baruchel’s comic turns were fantastic… Read more »