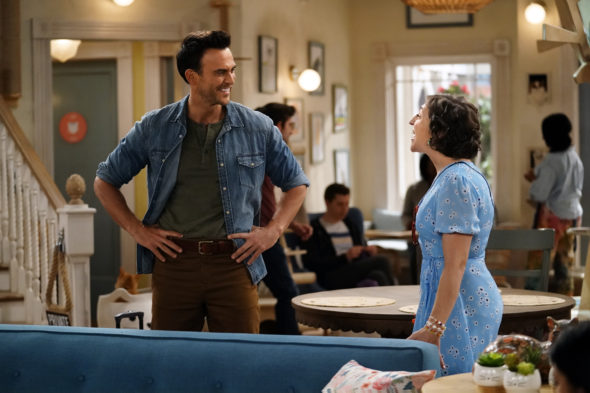 Will viewers keep coming back for more in the first season of the Call Me Kat TV show on FOX? As we all know, the Nielsen ratings typically play a big role in determining whether a TV show like Call Me Kat is cancelled or renewed for season two. Unfortunately, most of us do not live in Nielsen households. Because many viewers feel frustration when their viewing habits and opinions aren’t considered, we invite you to rate all of the first season episodes of Call Me Kat here.  *Status Update Below.

A FOX multi-camera comedy series, the Call Me Kat TV show is based on the British Miranda series. The U.S. sitcom stars Mayim Bialik, Swoosie Kurtz, Kyla Pratt, Cheyenne Jackson, Leslie Jordan, and Julian Gant. The story follows Kat (Bialik), a woman who struggles every day against society and her mother to prove that she can live a happy and fulfilling life — despite still being single at 39 years old. Kat’s mother, Sheila (Kurtz), views her daughter being single as her own personal failure. After leaving her job as a University of Louisville college professor, Kat spends the money her parents had set aside for her wedding to open a cat café. Working alongside Kat are Randi (Pratt) and Phil (Jordan). As Kat celebrates her independence, her single-forever plans begin to veer off-course. Her former crush and good friend, Max (Jackson), returns to town and takes a job as a bartender at the piano bar across the street and works with his friend, Carter (Gant).

What do you think? Which season one episodes of the Call Me Kat TV series do you rate as wonderful, terrible, or somewhere between? Do you think that Call Me Kat should be cancelled or renewed for a second season on FOX? Don’t forget to vote, and share your thoughts, below.

GOOD GRIEF….don’t tell me this show is back for another season!! PLUS it is being called the best show of last season. The lineup of CTV shows, last seasons and the upcoming season, are really scraping the bottom of the barrel. Global is beating you hands down in show quality.

I really enjoyed this show and will be so disappointed if it does not get renewed.
Looked forward to it every week.
PLEASE renew !!

I Loved call me Kate’s first season and want to see many more seasons ! Please renew call me kat!

Call me Kat, omg I loved the first season and I hope we get another season plus more to come.

I love call me kat. The cast is great and I love when they come out of character at the end. It’s like watching a live mini play each week. My mom love it too . We both hope it’s renewed.

My wife and I love this show! We watch live or record it every week. It is so nice to watch something that is just funny and offers a nice escape from the doom and gloom of our current events. Please do not cancel this show.

This show brings so many of us joy,laughter.has helped those of us who r homebound,depressed or jut your everyday person.please bring this how back.too much violence on tv.we don’t need any more of those shows.too much comedy not enough drama.ty

Bring back Kat! The plot is so hairbrained that it mimics true life. They have to renew it.

Please let there be a season 2 of Call me Kat! This show is so funny!! The cast are great together!!

I love Call Me Kat!!!, please please I need Season 2

I love this sitcom. Season 2 please !Love the cast

I love this show! It’s light-hearted and relatable and I love the chemistry between the characters that develops more each episode! Mayim Bialik and Cheyenne Jackson as Kat and Max are awesome! I love Leslie Jordan too! We need more shows on the air like this! Please don’t cancel this show!

In these unprecedented times we need a show that we can laugh and with and forget our worries for half an hour! No blood or gore and killing, just good old fashioned fun, that keeps us coming back week after week!