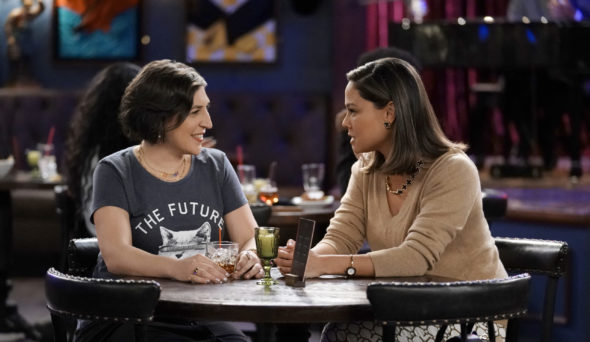 Call Me Kat will have a special premiere on FOX on Sunday night, and the network has now released several previews. The new sitcom stars Mayim Bialik as a woman who opens a cat cafe when she gives up on marriage and decides to put the money saved for her big wedding day to good use.

FOX revealed more about the new sitcom in a press release.

“New comedy CALL ME KAT, starring Emmy Award nominee Mayim Bialik (The Big Bang Theory), and executive-produced by Bialik, Emmy Award-nominated producer Jim Parsons (The Big Bang Theory, The Boys in the Band) and Darlene Hunt (The Big C), will have a special series premiere Sunday, Jan. 3 (8:00-8:30 PM ET/PT), following the NFL ON FOX doubleheader. The series then makes its time period premiere with an all-new episode Thursday, Jan. 7 (9:00-9:30 PM ET/PT). Based on the BBC UK original series Miranda, CALL ME KAT stars Bialik as a woman who struggles every day against society and her mother to prove that she can still live a happy and fulfilling life despite being single at 39. Which is why she recently spent her entire savings to open a cat café in Louisville, Kentucky. It was expected of KAT (Bialik) to be married with kids by now, but for many reasons, she’s still single – and totally fine with it. Of course, Kat’s mother, SHEILA (Emmy Award winner and Golden Globe nominee Swoosie Kurtz, Mike & Molly, Sisters), views her daughter’s single-hood as her own personal failure, but Kat remains determined to live a fulfilling life, and charts her own course to happiness. Working alongside Kat at the café are RANDI (Kyla Pratt, One on One), a confident millennial and self-proclaimed “non” cat person; and PHIL (Emmy Award winner Leslie Jordan, The Cool Kids, Will & Grace), who recently broke up with his longtime partner. Although Kat celebrates her independence, her single-forever plans may begin to veer off-course, when her former crush and good friend, MAX (Cheyenne Jackson, American Horror Story, 30 Rock), returns to town and takes a job as a bartender at the piano bar across the street, working with his friend, CARTER (Julian Gant, Good Girls). CALL ME KAT is produced by That’s Wonderful Productions, Sad Clown Productions and BBC Studios’ Los Angeles production arm in association with Warner Bros. Television and FOX Entertainment. Darlene Hunt is the executive producer and showrunner. Additionally, Jim Parsons, Todd Spiewak (That’s Wonderful Productions), Mayim Bialik (Sad Clown Productions), Miranda Hart, Angie Stephenson (BBC Studios) and Beth McCarthy-Miller also serve as executive producers. McCarthy-Miller directed the series premiere.”

Check out the previews for Call Me Kat below.

What do you think? Are you planning to check out Call Me Kat on FOX?

What can I say, I very disappointed. Did not find it funny, dispute a good cast. I will give it one more try

Kat is awful. I expect it will be cancelled after four episodes

The flight attendant murder mystery sweetie pie. It’s suppose to be suspenseful apart of show on HBO max streaming app. If not like mystery shouldn’t be watching not to be mean or anything let you know. Haven’t seen yet but Call me Kat so funny really hope it continue more episode during coronavirus pandemic era.

I really hope it’s good, we watched a few minutes of Penny’s show the flight attendant, and found it very disturbing, won’t watch that ever again.

I hope it’s good. It’ll be hard to top Miranda though!

Look forward to good comedy she so funny in the Big Bang theory was the best actress talented.