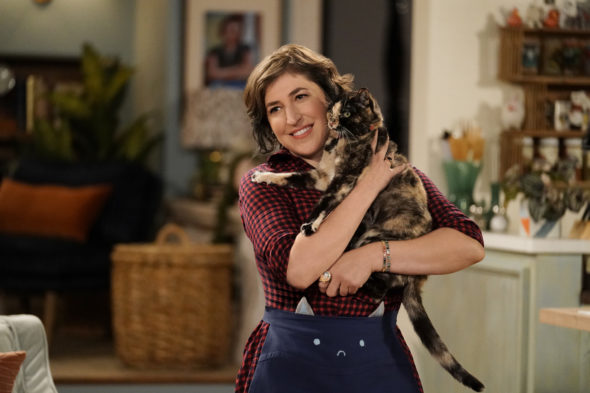 Kat’s four-legged friends will be purring for the 2021-22 television season. FOX has renewed the Call Me Kat sitcom for a second year. Showrunner and executive producer Darlene Hunt is departing the program and negotiations are underway for her replacement.

A multi-camera comedy series, the Call Me Kat TV show is based on the British Miranda series. The U.S. sitcom stars Mayim Bialik, Swoosie Kurtz, Kyla Pratt, Cheyenne Jackson, Leslie Jordan, and Julian Gant. The story follows Kat (Bialik), a woman who struggles every day against society and her mother to prove that she can live a happy and fulfilling life — despite still being single at 39 years old. Kat’s mother, Sheila (Kurtz), views her daughter being single as her own personal failure. After leaving her job as a University of Louisville college professor, Kat spends the money her parents had set aside for her wedding to open a cat café. Working alongside Kat are Randi (Pratt) and Phil (Jordan). As Kat celebrates her independence, her single-forever plans begin to veer off-course. Her former crush and good friend, Max (Jackson), returns to town and takes a job as a bartender at the piano bar across the street and works with his friend, Carter (Gant).

Airing on Thursday nights, the first season of Call Me Kat averaged a 0.59 rating in the 18-49 demographic and 2.61 million viewers in live+same day ratings. The 13 episode season aired from January until March of this year and the show ranked as one of the network’s highest-rated scripted shows for the season.

“We are excited to renew CALL ME KAT and have Mayim, Cheyenne, Swoosie, Leslie, Kyla and Julian return for their second season. Together, they share a winning chemistry that we, and viewers, adore,” said Thorn. “On behalf of everyone here at FOX, congratulations to this incredible cast and our terrific partners at Warner Bros. on delivering this season’s #1 new comedy.”

Inspired by BBC Studios’ British format “Miranda,” CALL ME KAT stars Bialik (“The Big Bang Theory”) as a woman who struggles every day against society and her mother to prove that she can live a happy and fulfilling life, despite still being single at 39 — which is why she recently spent her entire savings to open a cat café in Louisville, KY. CALL ME KAT also stars Emmy Award winner and Golden Globe nominee Swoosie Kurtz, Grammy Award nominee Cheyenne Jackson, Emmy Award winner Leslie Jordan, Image Award nominee Kyla Pratt and Julian Gant.

What do you think? Do you enjoy the Call Me Kat TV show? Do you plan to watch season two on FOX?

Great show! All of the characters are fun and likeable. Glad that FOX Renewed ‘Call Me Kat’! Peace, Marc

I will watch every season forever.

LOVE THIS SHOW. I will watch every season forever.

Tammy Lynn
Reply to  I will watch every season forever.

I love this endearing show. The friendships and promotion of feline adoption is inspiring. I can’t wait for another season. We need more sweet programming like this!!

Loved the show and anxiously awaiting season 2. It’s fun and thoughtful. Also, love it when the entire cast waves good bye at the end of each show. It’s sweet!!

I wasn’t a fan of the first season and I’m surely not going watch this one. I agree that Leslie Jordan is a great actor and person but can do better than this show. Sorry but the feeling of lighthearted that was proclaimed didn’t occur to me at all and it would have been a huge relief if it wasn’t on TV anymore. Mayim Bialik has nothing left of why I liked her on Big Bang and more a mystery to me how Fox could renew it with these demographic rateings.

B K
Reply to  Vanessa Thra

Respectfully this show is great! Mayim Bialik is such a quirky, fun and talented gal. I find this show as sweet and funny as it is refreshingly different. I’m glad to see Fox is bringing the show back!

Vanessa Thra
Reply to  B K

With any respect if you like it, watch it. You can have your opinion I do have mine and we are allowed to say it. Personally I find her terrible as a person and much more as an actress. It is not my sense of humour. She might be intelligent and an expert in her field but that doesn’t necessary qualify someone to portray a character and make it likeable. Sorry but for me she is wrong in that industry and step back from it.

For the “Haters” – FOX would not have renewed the show if it wasn’t doing well all around – meaning the streaming (on Fox’s own site and Hulu) FOX Broadcasting also owns a piece of the show, so they have a stake in it’s success – and they are just one of 5 parties involved with this show! They also are replacing Darlene Hunt as the showrunner. Which means a fresh person running the show next season – the scripts should improve. They can go past reusing plots from Miranda’s show. The series NEEDS to move away from reusing plots… Read more »

Sometimes I just watch it to see the tall hot guy.

It never stops amazing me that people come here and cause problems. You’re some people who cannot stand some shows and there’s some people who like shows. Otherwise if everybody was the same nobody would be even on this site. It would be so boring if everybody thought the same. Hence I think it’s nice that we have a place that we can voice our opinions either or good or bad. In this time in the world we’re lucky we still have a place like this.The TV shows might change but our thoughts and feelings always change

Leslie have you read the demographics and the viewership of the show? It’s horrifying. If you think that she deserves another season then well that’s your opinion there are many more people that hate this show and she has no business on the year. Other than her now advertising medication scription medication Fact. Just because she’s a PhD doctor in her field? Back to the big bang theory History she had it with the show? People come on this site and blab their little hearts out and try to criticize other people just because they think they are right. We… Read more »

I love this show!!! So happy and can’t wait for season 2! I was a huge fan of blossom growing up and a fan of big bang. I also connect with Kat on call me kat. I cant wait for fall now.

I’ll be honest, I wasn’t a huge fan of the show but I do admire Mayim Bialik and she for what it’s worth seemed to really be trying to work with some really weak material. It does have its fans though so maybe they can improve upon it. I was actually kind of thinking they would renew it anyway. I’d still watch it over “Let’s Be Real” any day.

Yes glad it’s bag love it as for the comments below no one asked you to watch! There are over 4 Million who do.

Some of the comments below yours are from people who are happy with the announcement, lol. Maybe not as you were typing, but whatever. But in order for people to determine whether or not they might like a show, don’t you think they should watch it first? I watched 4 episodes of it. Didn’t care for it. Saw no more. That’s called “giving something a chance”. Mighty fair of any person to do, whether or not they like a show.

Well it’s official. People have Absolutely nothing better to do than watch garbage. Even though Viewership it’s terrible renewed? Oh yeah have you seen this woman advertising medication commercials? Yeah she’s advertising some medicine that bettors your life?! There is so sad that some people just need to cash in on what success they had and then using their pseudo-medicine that’s how convince people to buy . That’s a sad way of thinking how they use people like this self virtually anyway.

Pardon me but are you trolling me? It’s safe to say that people like you that look for fights don’t belong here. If you notice what I said she is advertising medication on TV have you seen it? So what’s the point you’re supposed to believe everything this woman says now? No please instead of trying to look for arguments and fights stop while you’re far behind. Stop trolling people looking for fights.

To be honest, I don’t even understand why you are upset with me. One thing to be certain though, if my expressing a contrasting opinion is in your mind “looking for a fight” and I don’t belong here for it then perhaps you don’t. This is the internet and it does not cater to reflect in your viewpoints 24/7, although I don’t even disagree with you about the quality of the show if you even read my comment on this website. I just don’t have some personal vendetta against somebody being in a medicine commercial like you do.

Awesome news made my day thrilled coming back next fall season look forward enjoy her the Big Bang Theory so funny too.