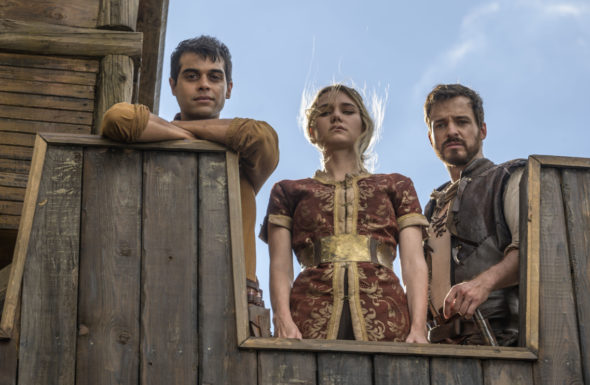 The CW has made some changes to its upcoming Summer 2021 schedule. The smallest network has announced that the fourth and final season of Burden of Truth will now launch on Friday, July 30th and the third season debut of Coroner has shifted to Thursday, August 19th. In addition, season three of The Outpost (which last aired in January) will resume on Thursday, July 15th.

Here’s The CW’s press release which offers many other series premiere and return dates:

Updated Premiere Date for Legal Drama “Burden of Truth” As It Returns for its Final Season Now on Friday, July 30 at 8:00pm

May 10, 2021 (Burbank, CA) – The CW Network announced today that it is adding the return of THE OUTPOST to its summer schedule and shifting some of its previously announced premieres, including new dates for BURDEN OF TRUTH and CORONER.

THE OUTPOST joins The CW’s supersized summer of original programming, including the previously announced series premieres of THE REPUBLIC OF SARAH and WELLINGTON PARANORMAL as well as the returns of DC’S STARGIRL, DEAD PIXELS, IN THE DARK, CORONER, ROSWELL, NEW MEXICO, RIVERDALE, SUPERGIRL and BURDEN OF TRUTH. The season premiere for MASTERS OF ILLUSION, previously announced to air this summer, will be announced at a later date.

The investigative procedural CORONER, starring Serinda Swan, will now make its season three debut on The CW on Thursday, August 19 (8:00-9:00pm ET/PT), followed by an original episode of THE OUTPOST (9:00-10:00pm ET/PT).

Every episode from the current season of BATWOMAN, DC’S STARGIRL, KUNG FU, NANCY DREW, THE REPUBLIC OF SARAH, SUPERMAN & LOIS and WALKER as well as BURDEN OF TRUTH, CORONER, DEAD PIXELS, MASTERS OF ILLUSION, PENN & TELLER: FOOL US, WELLINGTON PARANORMAL, WHOSE LINE IS IT ANYWAY? and WORLD’S FUNNIEST ANIMALS will be available to stream on The CW’s free digital platforms (The CW app and CWTV.com) following its broadcast on The CW Network.

Below, please find The CW’s complete calendar for its Summer 2021 schedule including new series and returning season premieres and key revised dates. All times ET/PT:

What do you think? Which new or returning CW series are you looking forward to watching this summer?

The CW is the only network that airs all of my favorite show and some new ones as well, but I wish the CW pick up Marvel S.H.I.E.L.D Then that will be nice.Thanks CW for everything.

This old guy just loves The CW. ABC was my second but just saw how many shows they cancelled. Rebel is a good show but they don’t want to give it a chance. Mixed-ish also and For Life are good shows. This is NOT good.

Thanks for the update!

Thanks for the info on CW. Did not realize that they were the repository of so many of my otherwise abandoned shows.

Looking forward to the return of The Outpost. One of my favorite shows on the CW. They could put The Outpost on any night of the week and I will watch it. Truly has become one of my favorites. Jessica does a really great job as Talon. The rest of the cast is good too. Hurry back Jess I miss you already. Love this show!!!

So far on this site I think it says Pandora has not been cancelled or renewed yet. They do say though that it is likely to be renewed. Just keep checking this website and they will keep you posted.