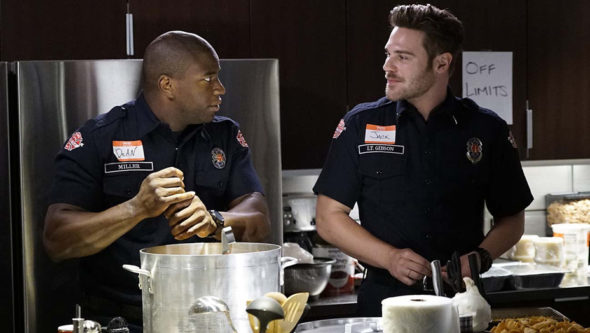 This show is still smoking! ABC has renewed the Station 19 TV show for a fifth season to air during the 2021-22 broadcast season.

Station 19 stars Jaina Lee Ortiz, Jason George, Boris Kodjoe, Grey Damon, Barrett Doss, Jay Hayden, Okieriete Onaodowan, Danielle Savre, and Stefania Spampinato. The TV series centers on the heroic firefighters at Seattle Fire Station 19. From the captain to the newest recruit, they risk their lives and hearts both in the line of duty and off the clock. The brave men and women are like family and together, they put their own lives in jeopardy as first responders to save the lives of others.

Airing on Thursday nights, the fourth season of Station 19 averages a 0.86 rating in the 18-49 demographic and 5.27 million viewers. Compared to season three, that’s down by 18% in the demo and down by 18% in viewership. It is the network’s second-highest-rated scripted series, behind Grey’s Anatomy.

ABC has also renewed Grey’s for an 18th season on the network. Here are portions of the announcements:

“‘Station 19’ and ‘Grey’s Anatomy’ have done an incredible job of honoring real-life heroes by giving audiences an unflinching look at one of the biggest medical stories of our time,” said Craig Erwich, president, Hulu Originals & ABC Entertainment. “[Showrunner] Krista [Vernoff] and her team of writers have continued to deliver the compelling and compassionate storytelling that is a hallmark of these shows, and created some of the year’s most-talked-about moments in television. We’re so grateful to our talented casts and crews for their extraordinary work that connects with viewers everywhere, and we look forward to sharing even more defining moments with our fans next season.”

“The writers, directors, casts and crews of ‘Grey’s Anatomy’ and ‘Station 19’ worked so hard to bring these shows to life this past season,” said Vernoff. “Keeping each other safe on set while paying tribute to the front-line heroes and first responders has been a challenge and a privilege. I’ve been truly blown away – particularly by our tireless crews – as they reinvented the TV-making wheel. Thank you to ABC and ABC Signature for the support and extraordinary partnership through this unprecedented season. We are so grateful for the opportunity to tell more stories.”

What do you think? Have you been enjoying the Station 19 TV series? Will you be tuning in for season five on ABC?

I love this show hope they keep making more

I do like the show, but like all the rest , the writers will ruin it , it happens to all the good shows !

Yes I agree, when they start putting sex is the main motivation and different types of sexuality is what killed the series for me. There is no reason for it it was good I did a second third season. Then everything went downhill from there. Sad because I really enjoy the show

Im in SA so still watching season 4. Loving the show. The true to life storyline is an eye opener. Has had me in tears most episodes this season. Keep going with the amazing stories. Keep safe

surprised there aren’t more comments here, i enjoy thumbing with all the comments 🙂 … Really glad you are renewing station.. this is a family affair for us all.. we watch it all together.. Love all the characters in the house 🙂