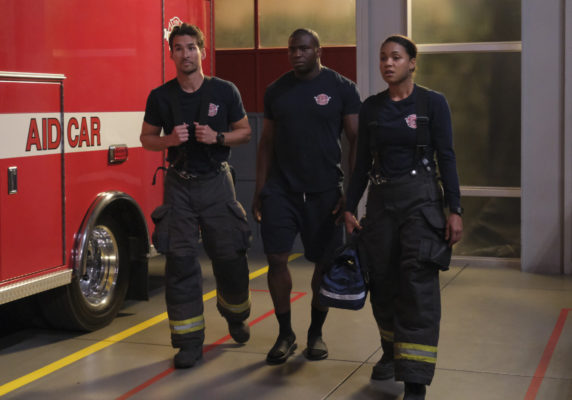 Could this show have too many Grey’s Anatomy crossovers?  Has the Station 19 TV show been cancelled or renewed for a fourth season on ABC? The television vulture is watching all the latest cancellation and renewal news, so this page is the place to track the status of Station 19, season four. Bookmark it, or subscribe for the latest updates. Remember, the television vulture is watching your shows. Are you?

Airing on the ABC television network, Station 19 stars Jaina Lee Ortiz, Jason George, Boris Kodjoe, Grey Damon, Barrett Doss, Jay Hayden, Okieriete Onaodowan, Danielle Savre, and Miguel Sandoval. The story centers on the heroic firefighters at Seattle Fire Station 19. From the captain to the newest recruit, they risk their lives and hearts both in the line of duty and off the clock. The brave men and women are like family and together, they put their own lives in jeopardy as first responders to save the lives of others.

The third season of Station 19 averaged a 1.05 rating in the 18-49 demographic and 6.46 million viewers. Compared to season two, that’s up by 10% in the demo and up by 22% in viewership. Find out how Station 19 stacks up against other ABC TV shows.

Will ABC cancel or renew Station 19 for season four? The network clearly wants this show to succeed and has promised more crossovers with Grey’s Anatomy, ABC’s highest-rated drama series. I’m sure it will be renewed. I’ll update this page with breaking developments. Subscribe for free alerts on Station 19 cancellation or renewal news.

What do you think? Are you glad that the Station 19 TV show has been renewed for a fourth season? How would you feel if ABC had cancelled this TV series, instead?

Since the show went all in for the Big Lie Movement, we’ve stopped watching. Hopefully it will be cancelled because the last thing we need is another kill whitey sanctioned propaganda outlet

No. Social justice poop hit an all time high in the last episode I saw. From the “fake hugging” (and acting) to police being attacked and blamed for everything, it’s time for the bad storylines to end.

I like the show , I don’t like the new show that’s on . But the original station 19 should keep going .

I really enjoy this show, especially the crossovers with Grey’s Anatomy, which I still love and look forward to seeing each week.

Started out OK, it’s become too much of a soap opera recently.

Like the show and wish it started this season sooner.

Yeah, so it would be over sooner

I don’t like the crossover because I don’t care to watch Grey’s anatomy. I will watch 19 when it does that but the storylines just aren’t that great. The romance part is tearing the rest of the show down. There are no good hook ups except for Jack. Andy isn’t easy to watch. She’s too big a mess since she and Jack split anyway.