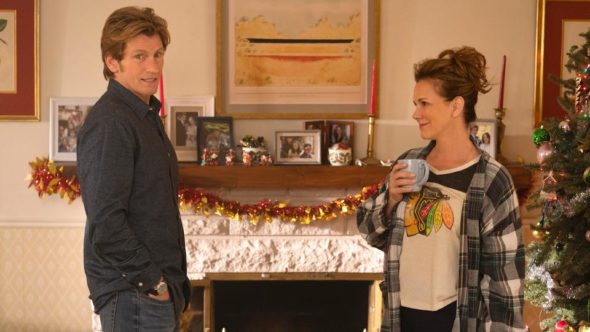 The holidays are over but The Moodys isn’t. FOX has announced that they’ve renewed the comedy series for a second season of 6-13 episodes. It’s unclear when season two will air but it won’t be holiday-themed.

The Moodys comedy series revolves around the Moody family of five. In the first season, they are a tight-knit, though slightly dysfunctional, group that gathers in their hometown of Chicago for the “perfect” holiday. Each Moody has his/her own eccentricities and is also hiding secrets from the other members of the family. The cast includes Denis Leary, Elizabeth Perkins, Jay Baruchel, Chelsea Frei, and Francois Arnaud.

Airing last December (when viewership is typically lower), the first season of The Moodys averaged a 0.50 rating in the 18-49 demographic and 1.92 million viewers.

FOX RENEWS COMEDY “THE MOODYS” FOR A SECOND SEASON

FOX has renewed the critically acclaimed comedy series THE MOODYS for a second season, it was announced today by Michael Thorn, President, Entertainment, FOX Entertainment. Starring and executive-produced by Emmy Award and Golden Globe nominees Denis Leary (“Rescue Me”) and Elizabeth Perkins (“Sharp Objects”), THE MOODYS follows a tight-knit, but slightly dysfunctional, family through their misadventures.

“With THE MOODYS, we set out to brand the holidays in the only way FOX can – bold and unconventional. What we ended up with was a special show – and a family – everyone at the network fell in love with,” said Thorn. “Bob Fisher, Rob Greenberg and Tad Quill perfectly captured the hysterics of Christmas, with sharp banter and real moments of family togetherness brought to life by Denis Leary, Elizabeth Perkins and the rest of the incredible cast. Eric and Kim Tannenbaum and CBS Television Studios have been great partners on this series; and, simply put, we’re looking forward to The Moodys’ future adventures.”

To stream all episodes of THE MOODYS, visit FOX Now and Hulu.

From CBS Television Studios and FOX Entertainment, THE MOODYS is written and executive-produced by Bob Fisher, Rob Greenberg and Tad Quill. Eric Tannenbaum, Kim Tannenbaum, Trent O’Donnell, Phil Lloyd and Jason Burrows serve as executive producers. Denis Leary and Elizabeth Perkins also serve as executive producers. THE MOODYS is adapted from the Australian series “A Moody Christmas.” THE MOODYS is based on the Jungleboys Entertainment Pty Limited and Australian Broadcasting Corporation series.

What do you think? Have you seen The Moodys on FOX? Do you think you’ll watch the second season on FOX?

I love show. It was scheduled in bad spot. Where are remaining episodes?

I’m glad this will be back, this is a great show.

It hits just the right note that also makes you think of comedies of this type from the past, so has a nostalgic feel as a bonus.