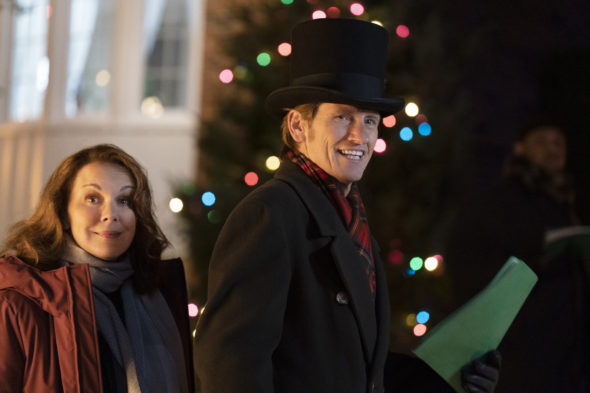 Do you want to join this family for the holiday season? Has The Moodys TV show been cancelled or renewed for a second season on FOX? The television vulture is watching all the latest cancellation and renewal news, so this page is the place to track the status of The Moodys, season two. Bookmark it, or subscribe for the latest updates. Remember, the television vulture is watching your shows. Are you?

Airing on the FOX television network, The Moodys stars Denis Leary, Elizabeth Perkins, Jay Baruchel, Chelsea Frei, and Francois Arnaud. Based on an Australian TV show, this series revolves around the Moody family of five. They are a tight-knit, though slightly dysfunctional, group that gathers in their hometown of Chicago for the “perfect” holiday. Each Moody has his/her own eccentricities and is also hiding secrets from the other members of the family. Sean Moody Sr. (Leary) and his wife, Ann (Perkins), are parents of three grown children. Freshly single, Dan (Arnaud) is the youngest of the siblings and the “creative one”. Sister Bridget (Frei) is married and the “overachiever” of the clan. Meanwhile, Sean Jr. (Baruchel), is the eldest sibling and the “screw-up” who still lives at home with his parents.

The first season of The Moodys averaged a 0.50 rating in the 18-49 demographic and 1.92 million viewers. Find out how The Moodys stacks up against other FOX TV shows.

Will FOX cancel or renew The Moodys for season two? This show was marketed as an event series but that doesn’t necessarily mean that there won’t be a second season. While the network might like to bring this show back as an annual holiday tradition, the ratings weren’t very good. I suspect that it won’t be back but, I’ll update this page with breaking developments. Subscribe for free alerts on The Moodys cancellation or renewal news.

7/12/20 update: The Moodys has been renewed for a second season on FOX.

What do you think? Are you glad that The Moodys TV show has been renewed for a second season? How would you feel if FOX had cancelled this TV series, instead?

please please give the Moodys a real shot…denis leary is the very besst and so is the whole cast….as a lover of rescue me was so happy to see another leary show…he carries every thing he is a part of and always has really cool cast as well….so much other dreck on alot of other shows that seem to go on and on for years can’t come close to the caliber of a Leary led program
L

Yes, please renew The Moody’s for another season. I loved the show and there is real chemistry among the cast.

Yes, continue sharing the Moodys with us. Anything Dennis Leary is always a hit.

I would love to see this series come back as a regular. Loved it. Not much on tv makes me really laugh and really cry like this one did.